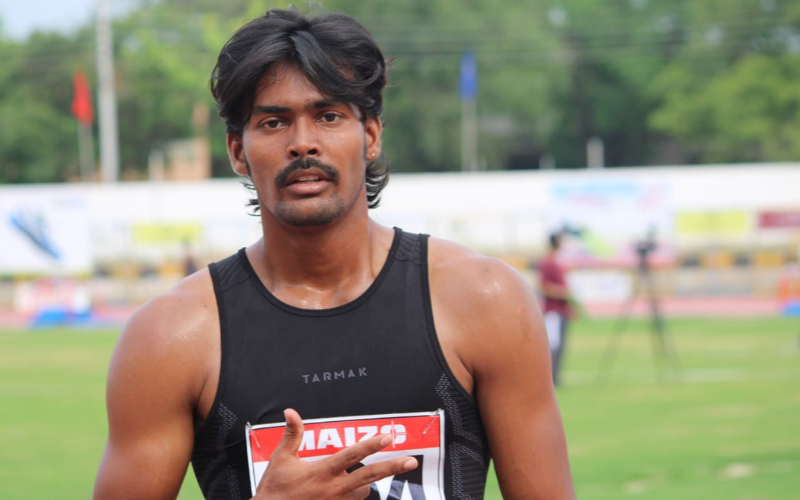 Nalubothu Shamugha Srinivas (Andhra Pradesh) set a new National U20 and Meet record when he broke the beam in the men's 200m final in a time of 21.02s seconds in the National Federation Cup U20 Junior Athletics Championships at the War Hero Stadium here on Monday. He was among eight athletes who earned qualification for the World Junior Athletics Championships in Kenya later this month.

Srinivas, whose previous best was 21.26 seconds clocked in the National Inter-State Athletics Championship in NIS Patiala on June 29, erased the National U20 record standing in the name of Ajay Raj Singh since December 6, 1996. The previous meet mark was set by Mohamed Mudassir in Chennai back in 2003.

Harshita Sehrawat (Delhi) was the other athlete who set new NU20 and Meet records in women's Hammer Throw when she broke Seema Jhakar's marks set at 52.34m in 2009. Harshita threw the ball and chain over 52.49m but missed out on qualifying for the World Junior Athletics Championships as the standard was set at 58.00m.

The other men who made the grade for the ensuing World event in Kenya are Hardeep (Punjab) and Rohan Kamble (Maharashtra) with times of 52.49 seconds each in 400m Hurdles, M Donald (Tamil Nadu) with 15.76m in Triple Jump and Vipin Kumar (Uttar Pradesh) with 68.94m Hammer Throw.