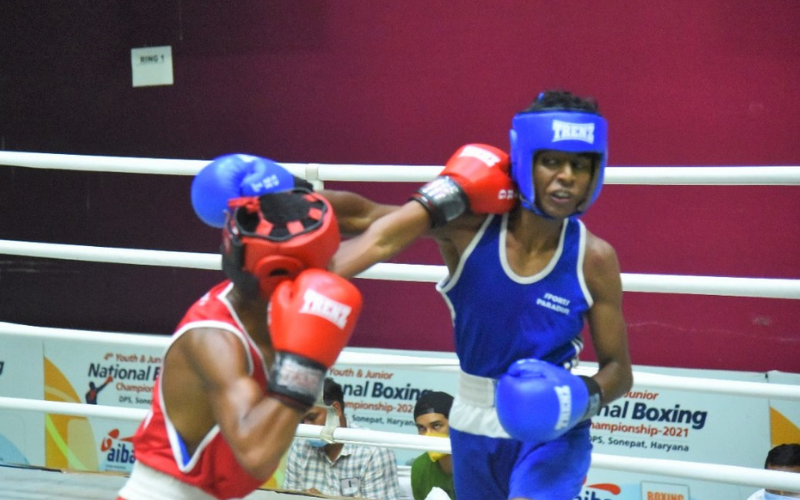 Press Release
Share
On an evenly-fought ultimate day, Services Sports Control Board (SSCB) boxers warded off a strong competition from Haryana to clinch the title at the 3rd Junior Boys National Boxing Championships at Delhi Public School (DPS) in Sonipat on Saturday.SSCB finished at top position with 64 points as they won 5 gold medals, 4 silver and 2 bronze whereas Haryana secured second place with 48 points after winning 4 gold, 2 silver and 2 bronze medals. Chandigarh took up the third spot with 2 gold, 1 silver and bronze each as they scored 27 points.In the 52kg light bantamweight final, SSCB's Nikhil comfortably beat Rohit Yadav of Uttar Pradesh in a one-sided bout that saw Rohit controlling the proceedings from the beginning. The boxer from UP was no match for his southpaw opponent.The remaining four gold medallists from SSCB were Akash (54kg), Preet (63kg), Ankush (66kg) and Naksh Beniwal (75kg) as they notched up convincing victories in their respective finals.The best bout of the day was fought between Chandigarh's Krrish Pal and SSCB's Harsh in the 46kg final as both the boxers exchanged mighty blows and attacked relentlessly from the word go but Krrish prevailed in a close bout and won 3-2. For his impressive show, Krrish Pal was adjudged as the Most Promising Boxer of the Tournament.The other boxer from Chandigarh to win the gold medal was Rohit Chamoli (48kg) as he defeated SSCB'S Neeru 5-0.
Haryana's Anshul (57kg), Yashwardhan Singh (60kg), Gaurav Saini (70kg) and Bharat (80kg) won their final bouts and claimed the gold medal.
The third edition of the Junior Boys National championships witnessed participation of 298 boxers competing from across the country.