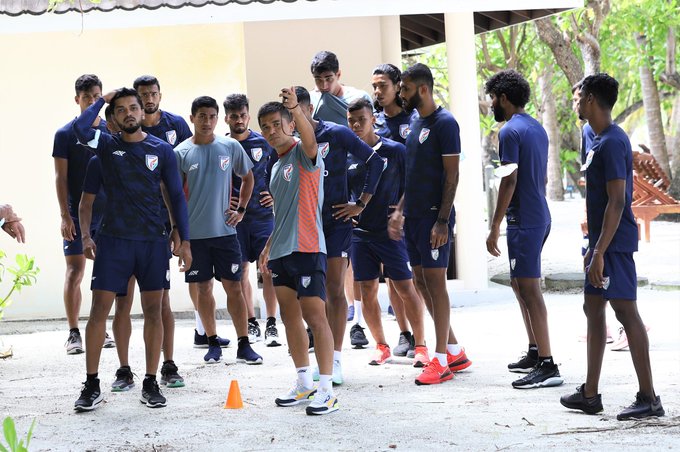 A day in between, and its matchday minus one again! The medical staff stay extremely busy working on the tight muscles and niggles; the technical staff stay busy in looking back at the last match against Bangladesh, and dissecting and planning tomorrow’s (October 7) one against Sri Lanka.

The players have been quiet since the Blue Tigers were held to a 1-1 draw by a 10-man Bangladesh. Fortunes in international matches fluctuate fast, and the boys have learnt it the hard way.

“We need to look forward. There are three matches left in the group stage. We were punished in the last match, and we need to improve,” Head Coach Igor Stimac stated.

A lot of football is still left to be played in the tournament. But on the surface, the five-team format suggests that every match is a must-win for India to ensure a smooth passage to the final. Of course, there will be mathematical calculations as every team moves ahead. Sri Lanka, India’s opponents, are, however, yet to win a match – having lost both to Bangladesh and Nepal.

At the official pre-match press conference, Stimac said: “It’s about patience, it’s about attitude, and it’s about the approach.”

The coach did hint that he may bring in some changes in the starting XI after having a final look at the condition of the players. “We still have 24 hours to go. We will have a clear picture about the players in the evening after we finish the training session. At that time, we will get to know how the players are feeling, how much the legs are loaded,” he averred.

Stimac has made no displeasure about the final result against Bangladesh. “We have analysed our game against Bangladesh and we are not happy with the final result. We are two points from what we have to have in our kitty.  So we need to do everything possible to win against Sri Lanka. We respect Sri Lanka as a team. I feel they could have two points from the two games they played. But they don’t have any, and that’s football,” he averred.

So what is the recipe moving ahead?

“We need to be better defensively. If we can’t score the second goal, we need to make sure that we don’t concede the second goal. Man marking is extremely necessary when u plays serious football, and we just cannot keep giving the balls away,” the coach maintained.

The players had a morning stroll and exercise session on the beach, while the practice session was slated for the afternoon.

Goalkeeper Gurpreet Singh Sandhu felt the most pertinent task at the moment is “to minimise the mistakes.”

“It’s not so easy when we come here. Playing at 4 pm isn’t easy. Most of us have been here before with our respective clubs. We were here for almost two weeks, and are used to the conditions. It isn’t unfamiliar.”

“We know that we can’t commit mistakes. That’s the most important aspect, and we need to make sure that we use everything to our advantage. We need to go out and do our job – which is to win.”

Referring to a question about the physical play from the Lankans which has been a talking point, Stimac added: “They play whatever they can to stop the opponent from approaching the final third. That’s allowed in football. In fact, all the teams here have the ability to fight. They are not giving up and that’s what Sri Lanka have been doing well – fighting till the final whistle.”

“We need to find a way to get past them, and we can do it by quick passing, with a lot of movement, moving into the final third. We will have our chances and we need to be clever and be patient against them.”

Central defender Chinglensana Singh summed it perfectly. “We need to play to our strengths, and do our duties to the best of our abilities which will get us the desired result.” The match against Sri Lanka kicks off at IST 4.30 pm tomorrow (October 7), and it will be telecast live on Eurosport.