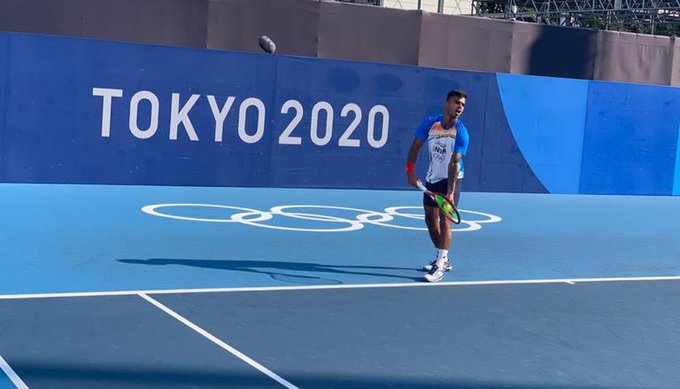 Sumit Nagal again went the distance and was able to prevail against Asian Champion Denis Istomin in a three-set battle to advance to the men's singles second round on Saturday.

India tennis player Sumit Nagal progressed to the second round of the men's singles here in the ongoing Tokyo Olympics. Nagal outclassed Uzbekistan's Denis Istomin 6-4, 6-7, 6-4 in the men's singles first round on Saturday.

Zeeshan Ali was the first Indian to win a singles match at the 1988 Seoul Games when he beat Victo Caballero from Paraguay.

After that, the legendary Leander Paes won the historic men’s singles bronze at the 1996 Atlanta Games, beating Brazil’s Fernando Meligeni.

No Indian could win a singles match after Paes’ heroic feat even as Somdev Devvarman and Vishnu Vardhan competed at the 2012 Games in London but did not manage to cross the first round hurdle.

The first set between Nagal and Istomin was a closely fought affair and neither one of them was giving an inch. However, Nagal was able to make the break at crucial junctures and as a result, he won the first set 6-4.

Sumit becomes the first Indian male to win a round at the Olympics Singles since Leander Paes. He will take on ATP #2 🇷🇺Daniil Medvedev next pic.twitter.com/FZ4J5111yn

The 23-year-old carried on with his momentum in the second set, and he upped his game a notch, not giving Istomin an inch.

Nagal had a comfortable lead in the second set and it was looking he would wrap up the match in a jiffy, but Istomin made a comeback and the second set was brought level at 6-6.

Istomin continued with his momentum and he went on to take the second set 7-6, sending the match into the third and deciding set. Nagal won the third set 6-4, and as a result, he progressed to the next round.

Nagal will Daniil Medvedev in the second round.