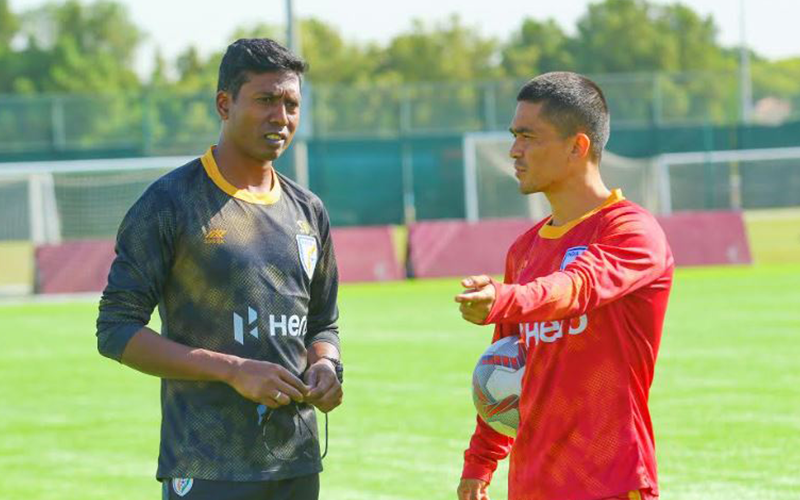 Sunil wasn’t my first option and I had my doubts, recalls Sukhwinder Singh

As the Indian Team landed in Pakistan in June 2005 for a Friendly series, all the stakes were heavily loaded against Sunil Chhetri. He was 20 and yet to make his International debut. It was an away series, that too against Pakistan. Moreover, he had an injury concern – all in a new-look team.

On top of everything, he was expected to fill in the shoes of his idol Bhaichung Bhutia, who was unavailable courtesy an injury.

As the Indian Team landed in Pakistan in June 2005 for a Friendly series, all the stakes were heavily loaded against Sunil Chhetri. He was 20 and yet to make his International debut. It was an away series, that too against Pakistan. Moreover, he had an injury concern – all in a new-look team.

On top of everything, he was expected to fill in the shoes of his idol Bhaichung Bhutia, who was unavailable courtesy an injury.

Sukhwinder Singh, India’s Head Coach for the series informs that he had “sleepless nights” wondering as to who would lead the attack in Bhaichung’s absence.

"It was a nightmare for me that Bhaichung wasn’t available. It was in Pakistan, and I knew the pressure would be immense. I needed someone who had the trickery, didn't have any fear, and had to be quick," he recalls.

"To be honest, Sunil wasn’t in my mind at all. He wasn’t my first option. I looked around and wondered as to who could fill in the vacuum. It was then I thought about him. But I had my doubts,” Singh stated. “He was short, and in front of physically strong defenders at the International level, did he have a chance?”

“But I knew him. He played under my coaching in JCT and he had shown promises of what he could do on the field. So I backed my coaching instincts and put him in. And he didn’t fail me,” the Coach maintained.

The opening match began with the summer sun belting down at the full-house Ayub Stadium in Quetta as both sides went all out for the opener. After a tense 45 minutes with India enjoying the upper hand, the deadlock was broken by none other than Sunil -- a true poacher's goal as he collected the ball inside the penalty area and spun to place it past the goalkeeper.

Captain Shanmugam Venkatesh, who was named the ‘Player of the Tournament,’ opined that it was the celebration after the goal rather than the strike that remains a “truly unforgettable” moment for him.

"I clearly remember the scene after the goal -- it was truly unforgettable. Sunil toh naughty tha hi humesha, par main uss se zyaada tha (Sunil was always naughty but I was a step ahead of him)," Venkatesh laughed.

"He scored on debut and ran towards the depressed Pakistani fans to celebrate. As soon as I saw him run, I told the others to not follow him. When he turned his head and saw that he was alone, he got scared. He ran back and asked with a beaming laugh -- 'Venky bhai yeh aapne karwaya na?' (Venky bhai, you made this happen right?).”

‘HE NEVER SAVED HIMSELF’

Throughout the match, and the series, Sunil's toughness -- both physical and mental -- was tested to the hilt. But he came trumps in both regards, with Sukhwinder pointing to his 'stubbornness' as a key trait.

"He was young, and I had to handle him delicately. He was a bit naive but all bubbling with enthusiasm, a dream in his eyes, and that unmistakable stubbornness in himself -- eager to grab the opportunity," Singh reminisced.

Venkatesh shared another compelling anecdote highlighting Sunil's 'dedication and commitment' from that time -- two words which have now become synonymous with Sunil over the years.

"He was carrying an injury before his debut. However, he was confident in himself that he will complete 90 minutes. We knew he will give it his all,” Venkatesh said. “It is easy for anyone to be selfish and play at 50% with an injury. But that was never to happen with Sunil. He didn’t think of anything else but gave his 110% on the field. He never saved himself and played his first match was the final match of his career. That set an example,” Venkatesh explained.

‘HIS VISION MADE HIM STAND OUT’

To remain at the top of your game and continue pushing the envelope for 15 years requires a mix of perseverance and building good habits day in, day out. "I still remember his hunger. He was hungry to learn. He was hungry to play and succeed,” Singh explained.

Venkatesh vividly remembers Sunil’s “hunger” from the first day of the camp which was held in Punjab. "Sunil had come into the camp after a great season with JCT. On the first day I saw him going on and on after the training -- practicing free-kicks, and penalties after everyone was done. I walked up to him, saw him from close, and even joked: 'Itna practice mat kar' (Don't practice so much)."

"Sunil had a clear vision even during his early days. He was sure of what he wanted to do, and achieve. The things he has been doing for the last 15 years is a result of this vision. I remember watching him train and thinking to myself that whether we have found our next striker after Vijayan and Bhaichung. But I never told him that. That may have made him complacent.”

“Completing 15 years at the International level is a great achievement. All the credit goes to him and none else. I will never use the word lucky for him -- it's all for his hard work," Venkatesh expressed.