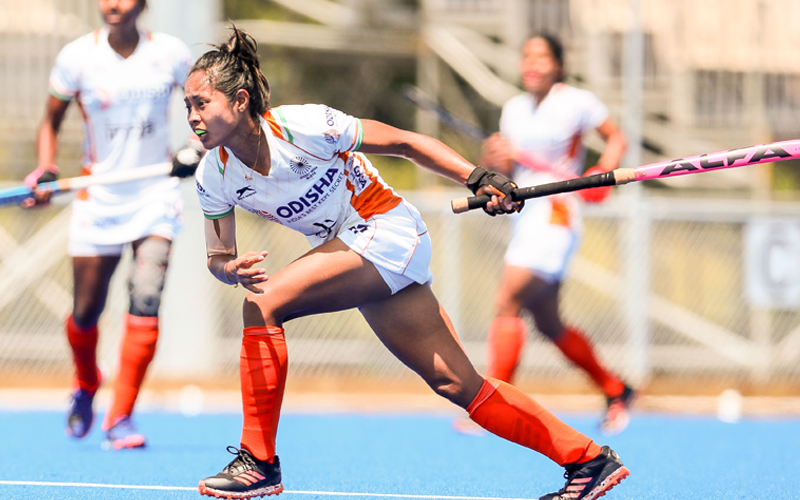 Sushila Chanu: "Happy about the support people have shown towards our fundraiser"

Indian Women's Hockey Team midfielder Sushila Chanu expressed gratitude for people's generosity after their launch of the fun fitness challenge to raise funds to feed the poor and migrant workers whose lives have been affected by the Covid-19 pandemic.

"It is very encouraging to see so many people support the Indian Women's Hockey Team's goal of feeding 1000 people who have been affected by the lockdown due to Covid-19 pandemic. We have received so much love and support from the people of this country towards our quest for success in hockey and the team felt this was the time to step up and do something for the people," expressed Chanu who hails from Imphal, Manipur where her father works as a driver.

In four days, the team has already raised over Rs 7,00,000 lakh and crowdfund will continue till 3 May 2020 when the lockdown ends. "We are delighted that people are not just donating for the cause but they are also participating in the fitness challenge. It is very important to remain physically active and the workouts we have designed throughout this challenge are not very difficult and can be done indoors," said Chanu. She had challenged people to do '20 pushups and 20 dips'. Among those who she challenged included former team mates Poonam Rani and Lily Chanu Mayengbam. In a subsequent team challenge to do 'V-sit for 2mins', Chanu challenged state-mates from Indian Men's Hockey Team Kothajit Singh and Chinglensana Singh. She also challenged boxer Sarita Devi to take up the challenge and donate Rs100 towards the crowdfund. The Women's Hockey Core Probables for the Olympic Games currently consists of 24 members and are based in SAI Centre, Bengaluru where they continue to focus on individual fitness routine and workout in isolation. Since the nation-wide lockdown was announced, the team has suspended formal hockey training and is making best use of this time to introspect on their own game and areas that require improvement. "I think the disappointment over Tokyo Olympics postponement is behind us. We collectively felt that this was best case scenario for us as we have been improving steadily over the past two years and we believe we can build on this rhythm in the coming months," stated Chanu who had Captained the Indian Team at Rio Olympics in 2016.

Speaking of their daily schedule, Chanu said, "Our Scientific Advisor Wayne Lombard has given us specific workout charts which we need to follow. The focus right now is to maintain our fitness levels and workouts vary from individual distance running to bodyweight training, workouts using stretch-chords and some weights we have available in our rooms. Though hockey training is suspended, we watch a lot of our previous match videos as well as opponent teams videos to analyse their game. We use a software to do this and I feel this is the best time to introspect on our own game to understand which areas need improvement."

Link to the fundraising platform: www.ketto.org/fundraiser/food-for-all

The proceeds from the fund will be donated to Delhi-based NGO Uday Foundation which will be used to provide basic necessities for patients hosted at various location, migrant workers and slum dwellers. Apart from food/ dry ration, the funds will also be used to provide sanitary kits that will include soaps and hand sanitisers.