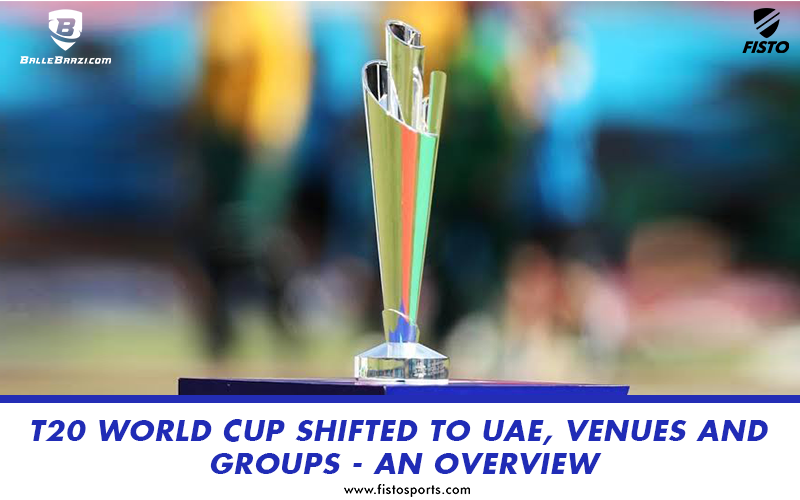 T20 World Cup 2021 which was originally set to be held in India has been shifted to the United Arab Emirates and Oman.

The BCCI will remain the hosts of the tournament which will be held from 17th October 2021 and the final will be played on 14th November 2021.

The second wave of COVID-19 in India which led to the suspension of Indian Premier League in May forced the BCCI and ICC to shift the tournament out of the country.

T20 World Cup will now be held across these four venues:

Andrew Tye, Adam Zampa and Kane Richardson had left the IPL midway. A few others had raised questions about the bio-bubble structure during IPL 2021.

4 players including Varun Chakravarthy, Sandeep Warrier, Wriddhiman Saha and Amit Mishra had been tested positive in a course of 2-3 days. A few members of support staff were also tested positive across multiple franchise.

This breach of the bio-bubble made it clear that organising such a big sports event is not ideal in India as of now even if BCCI remains the host.

It has been said that bio-bubble protocols were followed way better in the UAE than in India which led to the successful execution of IPL 2020.

UAE has always provided the best facilities for global tournaments and the lesser distance among the three venues makes it easier to follow bio-bubble protocols.

Thus, with the completion of deadline it was decided that holding the tournament in India would not be possible.

In India, you definitely need to do air-travel to reach from one prominent venue to other. This would have definitely chocked the bio-bubble.

Bangladesh, Sri Lanka, Ireland, Netherlands, Scotland, Namibia, Oman and Papua New Guinea will play the qualifiers and four of them will move to the Super 12 Stage.

Group 1 of the event consists of England, West-Indies, Australia and South Africa.

Winner of Group A and Runner-Up of Group B of the qualifying stage will join this group.

On the other hand, Group 2 has India, New Zealand, Pakistan and Afghanistan.

Winner of Group B and Runner-Up of Group A of the qualifying stage will join this group.

On paper, Group 2 definitely looks the easier group and thus team India might find it easy to qualify for the semi-final.

Cricket Pundits have termed Group 1 as the group of death. The presence of 2016 T20 World Cup Champions West Indies and Runner-ups England will certainly make it really tough for all the other teams in this group.

India have definitely lost their home advantage given the consequences of the second wave of Covid-19 on the country.

The conditions in UAE though traditionally support spin bowling but it wasn’t the case in IPL 2020 in which teams with weaker pace bowling line-ups suffered to survive.

This clearly suggests teams need to have a really balanced bowling line-up coming in to the T20 World Cup in the UAE. While, Dubai and Abu Dhabi might offer some turn, Sharjah’s smaller boundaries can probe to be fatal for spinners.

All the teams might revisit their plans and strategies in order to cope up with this.

Even though the UAE looks a safe place to organize this global event, ICC and BCCI needs to really make sure that the protocols are followed strictly.

It is an event where all the global stars will compete and it is important to provide them conditions where they feel safe and not anxious about their health.