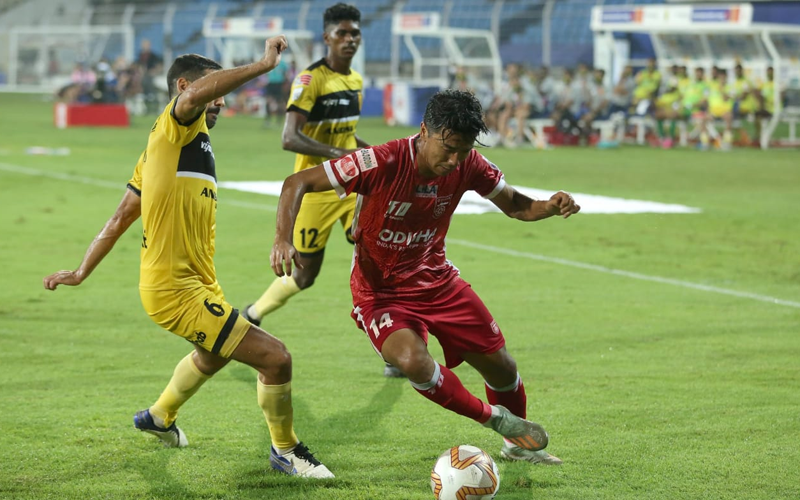 The clash between Odisha FC and Hyderabad FC saw the two sides land equal blows as the spoils were shared last night.

The Nizams dominated the first half, eventually taking a 13th minute lead via Halicharan Narzary. However, the Kalinga Warriors were revitalized at halftime, notching a 51st equalizer thanks to Cole Alexander.

Check out our #ISLRecap to see how #HFCOFC panned out 📺

The warning signs were evident for Odisha in as early as the 11th minute when a mistake from keeper Arshdeep Singh almost gifted Hyderabad the lead. Asish Rai drilled a low cross into the box which was spilled by Arshdeep, and fell straight into the path of Narzary. The forward unleashed a shot but Jacob Tratt saved Odisha the blushes with a crucial block.

However, just two minutes later, Hyderabad would go on to break the deadlock. After receiving a long ball from keeper Laxmikant Kattimani, Aridane Santana flicked it on towards Liston Colaco, who made a run in the box. The youngster squared it towards Narzary, who notched his fourth goal of the season with an easy tap-in.

The Nizams had a golden opportunity to double their tally in the first-half but were denied by the woodwork. Colaco was involved in the move again, playing the ball to Aridane, who found Narzary on the left. The goal-scorer cut inside and fired a shot towards the bottom corner, which unfortunately came off the upright before being cleared out.

OFC come out stronger in the second half

It didn't take long for Odisha to draw level as they scored from a set-piece against the run of play soon after the break. Rakesh Pradhan found Diego Mauricio from a throw-in, and he played the ball towards Alexander. The Odisha captain struck on the volley from outside the box, as Kattimani stood still, watching the ball head into the bottom corner.

Stuart Baxter's side should have taken the lead late in the 74th minute but Akash Mishra came to Hyderabad's rescue. Mauricio made his way into the box after beating his marker before flicking a shot over Kattimani. However, his goal-bound effort was cleared by Mishra, whose clearance struck the underside of the bar before heading out.

Odisha continued to push for a winner in the dying minutes but some dogged defending from Hyderabad saw both sides settle for a point at the full-time whistle.