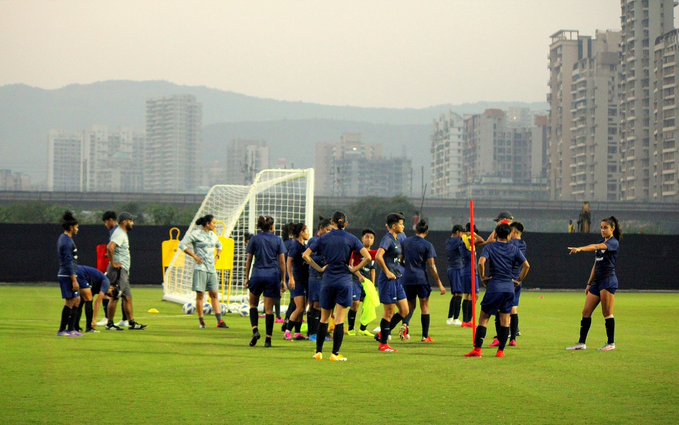 Just four days are left for the AFC Women’s Asian Cup to get underway, and the Blue Tigresses are in Mumbai, preparing for their first match against IR Iran, which is set to take place on January 20 at the DY Patil Stadium.

While the team operates from within a bio bubble, and have their focus fully settled on the task ahead, the excitement of the Asian Cup has, in a way, seeped in from the outside. On the way to training, and back to the hotel, the players are excited to see billboards with gigantic pictures of themselves.

As the Team India buses wheel around the corners of Navi Mumbai, people stop in their tracks to peek at the Blue Tigresses as the team bus pass by. Some give a friendly wave, some in a hurry try to click a picture of the team bus but by that time, the bus has already whisked away.

“It’s sad that we won’t have the fans in the stands to support us in the Asian Cup, especially since we are the ones hosting it,” said Dangmei Grace. “But seeing such excitement everywhere is certainly motivating for us all. When you play for the country, you always dream of such support.”

Being a young squad with 15 players under the age of 25, such things are new to the girls, but the motivation levels, which were already at a high level when they had left Kerala, have soared higher.

“The organisers have really gone all out to create this buzz. We can all see our faces all over town at every street corner. It’s a completely new experience for us. These may be very small things, but they go a long way in motivating you as a player,” said defender Sweety Devi.

On the pitch, however, it’s business as usual for the Blue Tigresses, who are determined to get off to a good start against Iran on January 20.

“It’s important for us to get a good start in the first match itself. That would really give us the confidence to push ahead,” explained midfielder Indumathi Kathiresan. “We had played Iran a couple of years back in the Hero Gold Cup, and they are a good side. They are a side that has qualified for the Asian Cup, and they deserve the respect. Having said that, we are confident in our abilities, but not overconfident.”

ONE STEP UP FOR THE TEENAGERS

With a squad that has an average age of 23.13, the Blue Tigresses also have as many as four teenagers, who have broken into the team – Hemam Shilky Devi, Naorem Priyangka Devi, Sumati Kumari, and Mariyammal Balamurugan. All four of these players have played in the National Teams youth setups, and have now made the step up to senior side.

Out of these four teenagers, 18-year-old Mariyammal and 16-year-old Shilky have already made their senior international debuts against none other than Brazil in November last year.

“It was definitely a surreal experience to play in Brazil. But we can never stop at that. For me, this is just the start of my football career, and I want to keep pushing as far as I can. Playing Brazil was a unique experience, but playing the Asian Cup will be even bigger. We can’t wait,” said a beaming Mariyammal.

India are set to play IR Iran (January 20), Chinese Taipei (January 23), and China PR (January 26) in Group A of the AFC Women’s Asian Cup India 2022. All of India’s group stage matches will kick-off at 7.30 PM IST, and will be broadcast live on the Eurosport channel, and streamed live on Jio TV.