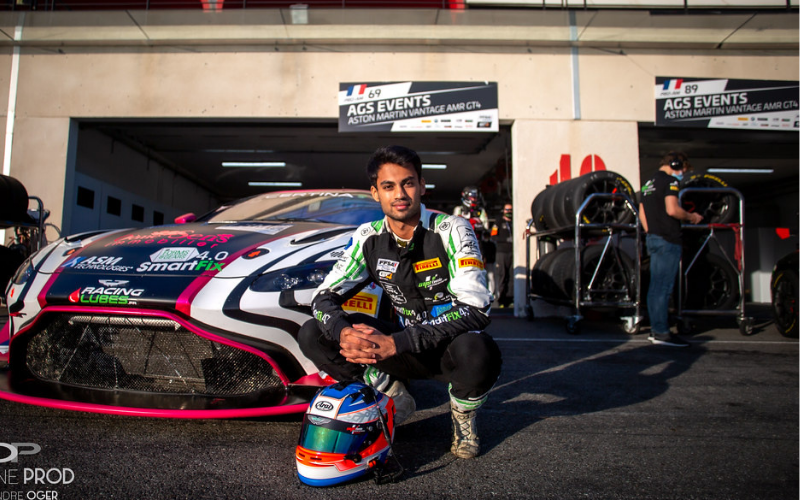 Akhil Rabindra, the only Indian on the European GT4 Championship grid, racing for AGS Events Racing Team, finished P11 in the Silver category in Race 1 along with his team mate Hugo Conde in an incident laden round four of the championship in Belgium last evening. The race was being hosted at the iconic Circuit de Spa Francorchamps which also hosts  the much awaited Belgian Grand Prix .

The Indo-french duo driving the Aston Martin Racing V8 Vantage GT4 for AGS Events Racing Team had earlier finished at P13 & P12 in the Silver category at the Qualifying race 1 & 2 respectively. Akhil took to the steering wheel after the pit stop in Race 1 of the fourth round of the European GT4 Championship made an impressive run to finish P11 in the Silver category and an overall P23 from a grid of 37 cars. Akhil while being on the driver's seat completed 21 laps in 1:02:22.434 minutes.

Circuit Spa is known for inconsistent weather and the rain started with the formation lap which caused a lot of splashes and caused visual disruptions for the drivers on the grid. Akhil started the Race 2 and Hugo who took over the driver's seat after the pit stop but with just few minutes to go for the final lap the damper broke and the duo finished the race at P14 at Silver cup category and completed 19 laps at 57:09.649 minutes and  overall P36.

Akhil Rabindra commented, "We could have done much better and are definitely not happy with our performance. The rain made it difficult it impacted the speed and also the technical glitch at the end of the race which was unexpected. We will have to keep working on our performance and keep improving to ensure that in future such indirect and unforeseen hurdles do not impact our positions drastically."

Akhil hopes to ride on experience at Spa-Francorchamps, Belgium, for Round 4 of the 2021 European GT4 Championship