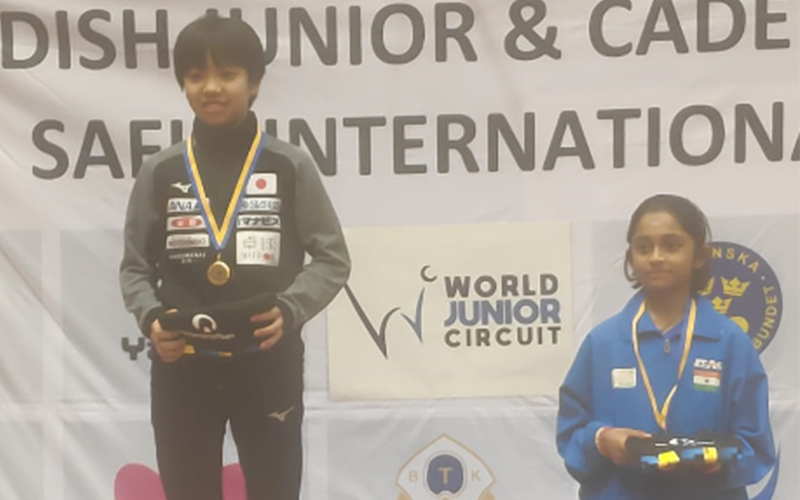 In her maiden appearance at an International Table Tennis Federation (ITTF) junior circuit event, Chennai’s table tennis prodigy, Mathan Rajan Hansini put up an impressive performance by bagging the bronze medal in the Mini-Cadet Girls’ Singles category at the Swedish Junior and Cadet Open in Orebro, Sweden yesterday. The 10-year-old Class V student started her main draw challenge after a couple of wins in the group stages before going down to Russia’s Iuliia Pugovkina 12-10, 9-11, 5-11, 8-11 in a gruelling semi-final match.

Under the tutelage of Muralidhara Rao, who has experience of coaching top paddlers in the country such as Sharath Kamal and K Shamini, the 2028 Olympic medal prospect has been honing her skills at the Ultimate Table Tennis (UTT)-backed SDAT AKG Table Tennis Development Centre in Chennai. It has helped her make rapid strides in the sport as validated by her bronze medal win in cadet girls’ singles at the 2019 UTT 81st National Table Tennis Championships.

The Super Saturday for Indian paddlers continued even in the seniors when the men’s doubles pair of Achanta Sharath Kamal and Gnanasekaran Sathiyan clinched a silver medal at the 2020 ITTF World Tour Hungarian Open in Budapest. The pair put in a strong effort but eventually went down fighting 5-11, 9-11, 11-8, 9-11 to the 16th seeds Benedikt Duda and Patrick Franziska of Germany in a 30-minute summit showdown.

Sathiyan and Sharath Kamal had been splendid all week and had even accounted for the top seeds Ho Kwan Kit and Wong Chun Ting of Hong Kong in a hard-fought 3-2 victory in the semi-finals.

This is Sharath Kamal’s second medal from this prestigious tournament as he also went on to win a bronze in mixed doubles in partnership with Manika Batra.