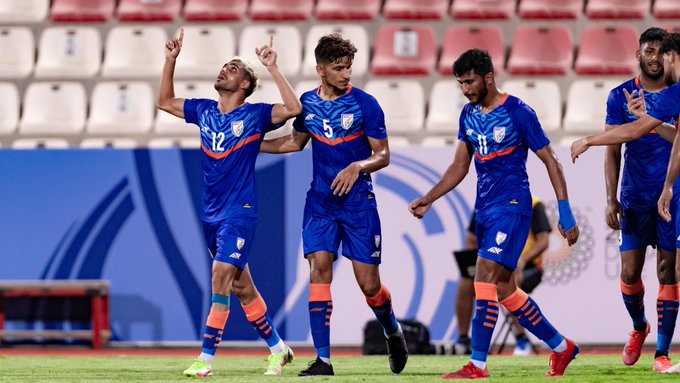 No one stays willing to take credit for India’s 2-1 victory against Oman in their first match of the qualifiers for the AFC U23 Asian Cup. The Head Coach credits the players, the players in turn thank the coach, and highlights the team spirit for the “brilliant performance”.

“The entire credit goes to the boys especially given the fact that they didn’t have much time to prepare for this. The togetherness they displayed on the pitch, and their tactical discipline makes me extremely happy. But this is just one game, and there are two more to go,” Head Coach Igor Stimac stated.

The 2-1 victory was India’s first-ever victory against Oman at the U-23 level. But the Coach wasn’t much willing to read into it. “I have told my boys to forget this result. It’s always important how you leave a tournament, and not how you start it. We concentrate on the next game, and we go one by one,” Stimac added.

The confidence of the boys strikes you, and you turn to them. “I’d say the Indian Arrows project helped us immensely – not just for me, but for the entire batch. It helped develop our footballing ability and skill,” Deepak Tangri expressed.

For the record, there are 20 players who have graduated from the Indian Arrows project into the squad of 23.

“The most important facet of the Arrows project is the exposure it gave us with regards to the multitude of opponents we faced in various countries at the U19 level. It built confidence in us. Getting more and more games at a young age coupled with the fact that we played teams from different regions exposed us to play against multiple styles, and all of that aided in our development,” he said in one breath.

Deepak’s defending partner Narenfder Gehlot added: “We have to dust ourselves off and focus on the next task at hand which is the upcoming game against UAE. They are the hosts, and are extremely strong.”

The next couple of days will be all about recovery, taking care of the niggles, and the knocks – the medical team staying extremely busy.

Striker Rahim Ali who converted India’s spot-kick early in the first half, maintained that “in such a match it’s hard to pick up a man of the match.”

“Can you pick up a Man of the match in such matches?” he queried. “You just can’t,” he continued. “This is a brilliant team effort, and everyone contributed to the victory. We played as a team, and want to continue the trend.”

Vikram Partap Singh, India’s second goal scorer quipped: “I was desperate, everyone was desperate. But it was set up for me from behind. I just had to finish it. It was a brilliant team performance.”