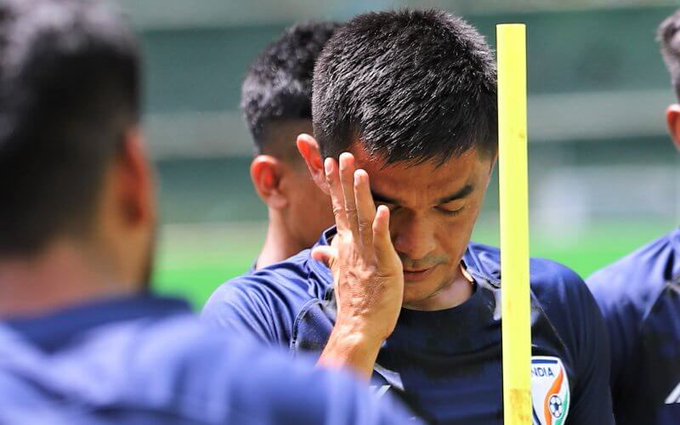 As the Blue Tigers gear up to play Nepal in the SAFF Championship final, National team captain Sunil Chhetri opened up on a lot of issues involving the Blue Tigers. In a chat, Sunil spoke at length about “Nepal being the best team that plays as a team,” about seniors taking the lead to lift up the mood in the camp, Manvir Singh being a “beast and machine,” going past Pele’s record, handling expectations, and much more.

How tricky an opponent will Nepal be in the final?

They may not have an extraordinary player in their ranks like an Ali Ashfaq in their ranks. But as far as attacking and defending are concerned, they do it as a team. They have been the best team that plays as a team in this Championship – they fight as a team. We have played them thrice since September and they are extremely compact as a team and it’s not going to be easy. But we have become better and better as games have gone by, and in the final we have to be at our best. We pulled our socks up after the first two games and now it is time to finish the job. But the job is not yet done.

What kinds of talks went on during the opening stages of the tournament?

Generally, the senior ones make sure that they calm the whole situation. When you have a team with a lot of youngsters, and if the mood and tempo go down, they may not be able to perform to the best of their abilities. The manner in which we lost two points in the first two matches wasn’t an ideal start. What was good was that the likes of Gurpreet, Kotal, Bheke, Subhashish started talking and mixing with the juniors to make sure the mood didn’t deteriorate. After all, it was easy to get into that vicious circle where you could have started to doubt each other. They made sure that there was a bit of banter, plenty of good vibes, some leg-pulling and the mood changed.

How do you describe Manvir Singh as your striking partner?

He is very talented, hungry, and a beast. He kills every test that we do at the camp – be it strength, stamina and speed. The guy is a machine. He has different roles in his club, and the National team and is working hard to adjust to the switch perfectly. He needs to learn to adapt, and he needs to do it by himself. He falls back and defends, and is an asset during attacking and defensive set-pieces. He is a proper weapon in our side.

What do you feel about results not being consistent?

The results haven’t been great and the first ones who should take the blame are us -- the players. I can give you examples of five games which we should have not drawn, or lost. When you lose 0-1 against Qatar in Doha with 10-man, you take it. But then you lose the lead against Afghanistan to draw 1-1. We should have won against Bangladesh at home after drawing Qatar in Doha. I am not demeaning any opponent but we should have also won handsomely against Sri Lanka. The amount of chances me and Manvir missed is not acceptable. We can’t be that volatile. Take for example the match against Maldives. The manner we played against Maldives in Maldives in front of a packed stadium wasn’t easy. But how do you compare it with the manner we played against Sri Lanka? We need to be more consistent.

How much will Subhashish Bose be missed in the final?

I hope whoever replaces him can do a good job. Bose and Bheke have been brilliant at the back. Predominantly they play as full-backs at their respective clubs, but the duo has done a fantastic job so far. They have been vocal and charged up during this tournament, leading this team at the back. They were so charged up – they inspired the youngsters. Among the seniors, they have been the best performers so far.

You are now above Pele in terms of International goals scored. What qualities of Pele have you admired over the years?

Unfortunately, I did not get much footage of the great man to watch. Whatever little footage I could see – he was somebody who was dynamic, and powerful. The kind of challenges which were allowed at the time – football was much more brutal and physical. So to be that strong physically and mentally during that era and score that many goals was such a huge achievement.

There are huge expectations every time you go out and play. How do you manage to score so consistently despite all the pressure?

I try not to think much about it. I stay away from all the surrounding noise if I may say so. Otherwise, a few of the times I have failed not to do so, I have bogged myself down. It’s not healthy for me to read and to see what’s been talked about. So I keep myself away and keep it simple -- I try to go and score for whichever team I play for. I understand people have an opinion about me but that’s none of my problems. I learn from what I have done wrong, and try to improve – that’s my job.

You presented your Man of the Match Award to Lalengmawia after the match against Maldives.

I wish I had two Man of the Match Awards which I could give to both Lalengmawia and Suresh. But Suresh stays close to me so I can give him something else. But Lalengmawia was brilliant, as was Suresh. When they were chosen to play this match, I didn’t see even an inch of doubt in their eyes and behaviour. They were so confident which was so soothing, and comforting. And then the manner they played made me so happy. I hope they keep their heads on their shoulders as they can do a lot of good for the nation.

AFC U23 Asian Cup Qualifiers: U23 boys stay determined to make it count against Kyrgrz Republic