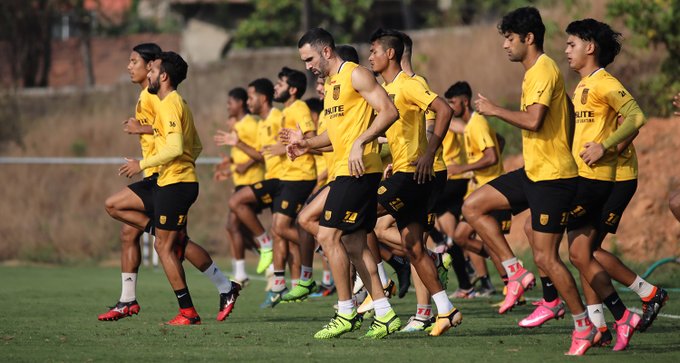 Last season, Hyderabad and NorthEast United finished at the bottom of the Hero Indian Super League table. But the two struggling teams have turned around things in style in the current campaign, and are still in contention to qualify for the playoffs.

At present, both have accumulated 22 points after 15 games with fourth-placed Hyderabad just above their opponents, thanks to a better goal difference. And as they prepare to face each other at the Tilak Maidan Stadium on Sunday, a win for either side could propel them to third.

Interim coach Khalid Jamil has made NEUFC the team to beat since taking charge in January, leading them to three wins and a draw. While the Highlanders haven't kept a clean sheet in nine games now, their attack has been their main strength, having scored 21 goals – the second-highest tally in the league alongside FC Goa.

And their recent run of results hasn't gone unnoticed by Hyderabad coach Manuel Marquez. "The work of Khalid is very good because it's not easy to win against ATK (Mohun Bagan), Jamshedpur (and Mumbai City) and the other day when you are twice down against Goa to equalise the game (2-2)," he said. "I think the most important thing is that Khalid gives the players confidence. They play with a good organisation in defence and have very good players in attack. Of course, we will have options to win the game if we play to our style."

To increase their chances of winning, HFC will have to keep a tight leash on midfielder Federico Gallego, who has been key to NEUFC's attack. The Uruguayan has scored 4 goals and contributed as many assists besides creating the most chances for his side. However, Khalid believes their recent progress has been down to the team effort.

"It is not about the individuals," he said. "Everyone is working hard, the players are doing their job and are enjoying. Even the staff, everyone is working together. This is the main secret (to our success)."

But one aspect Khalid will be aware of is NEUFC's tendency to concede in the second half, having shipped 60 percent of their goals during that period. Furthermore, HFC have netted 15 of their 20 goals after the break.

"Hyderabad is a good team and they prepare very well," Khalid said. "Our preparation will always be the same but tomorrow's match will be crucial."