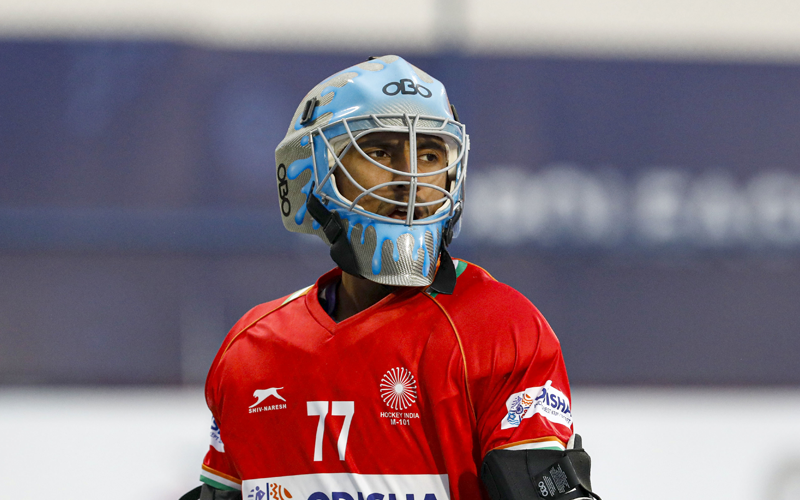 "This year has taught me the importance of being mentally strong," says Indian Men's Hockey Goalkeeper Suraj Karkera

Karkera is making the most of training with stalwarts like PR Sreejesh, SV Sunil, Akashdeep Singh among other seniors in the National Coaching Camp.

In June this year when the Indian Men and Women's Hockey Core Probable Groups were allowed to take a break to be with their families after a series of nationwide lockdowns, Goalkeeper Suraj Karkera had decided to stay back in SAI, Bengaluru as Covid-19 cases were high in Mumbai, where his parents live. During this time in SAI, he spent most days in his room reading books and watching matches from previous years.

Unfortunately for Karkera, when his teammates returned to Camp in August after a six-week break, Karkera was admitted in the city hospital due to dengue. "This year has been an absolute roller coaster ride. I had decided to stay back in SAI because I felt traveling to Mumbai was not safe for me as it had too many cases of Covid-19. But as fate would have it, I got dengue just when we were getting together to restart the camp. It has since been a steady road to recovery and full fitness," expressed the young goalkeeper who was part of the Indian Team that won Bronze in the 2017 Hockey World League Final and was part of the team that witnessed Asia Cup success in Dhaka in 2017 as well.

Karkera feels fortunate to have had the support of the Coaching Staff all through this period. He said, "When I was alone in the hostel, I was constantly checked on by our Chief Coach and Scientific Advisor. It has not been easy for them either to have not seen their families back home for more than ten months now, so there used to be a lot of talks about being resilient and at times, we would also talk about Graham's playing days. He has a lot of interesting stories to share with us, and they are all quite inspiring. I personally feel this year has taught us a lot in terms of 'anything can happen in life' and we need to be mentally strong to face it."

Now, Karkera's primary focus is to make the most of his time with senior stalwarts like PR Sreejesh, SV Sunil, Akashdeep Singh, Manpreet Singh among other players to hone his skills as a goalkeeper. "I feel fortunate to have been in the National Coaching Camp with stalwart players including someone like Sardar Singh who had so much experience. Now with senior players like Sreejesh, Manpreet, Sunil, Akashdeep etc around, there is a lot that I learn from them. They are constantly guiding me on the field and off it. My focus now is to improve my skill, footwork and timing to be ready for the next assignment and be in the reckoning for team selection," Karkera said.