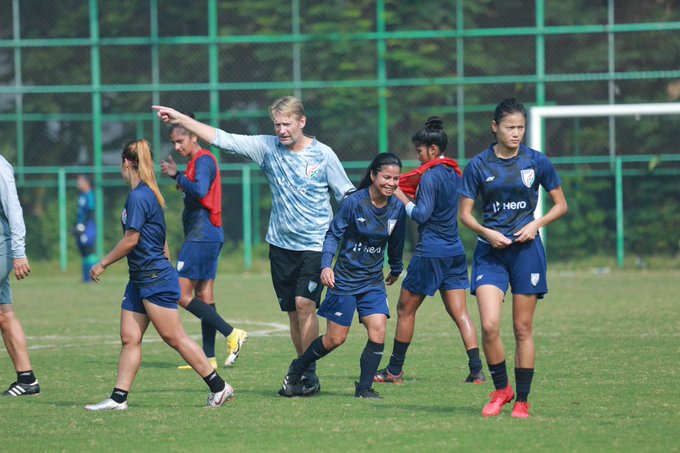 India, under Swedish Thomas Dennerby, enter January's 2022 AFC Women's Asian Cup aiming to rebuild their team’s reputation on the continental scene. The hosts were a competitive side in the early editions of the Asian finals, notably finishing as runners-up in 1979 and 1983.

But the decades since have brought little to celebrate for the Blue Tigresses. Indeed, India have featured in just five of the past 14 editions, never progressing beyond the group stage.

Competing as hosts of the upcoming Women's Asian Cup, however, provides India with the chance to rewrite a few of those statistics, although Dennerby - who took over in August - is aware of how tough his task is.

The former Sweden and Nigeria coach, who has been managing India’s U-17 side over the past two years, sat down with FIFA.com to share his vision for India football, the current squad and the trends in modern-day women’s football.

Coach Dennerby, thanks for speaking to FIFA.com. How do you approach the job of managing the women’s national team of the world's second-most populous country?

I was honoured to get the job, and it’s an extremely challenging one. It’s also an inspirational job considering that the Women’s Asian Cup is drawing nearer. We have been played games and the Federation (All India Football Federation) has been helping us on that. You need to understand it’s not easy to prepare for competitive games at this juncture because of the quarantine rules in many countries. We have played [friendlies] in UAE, Bahrain and Sweden. Such games help us to gauge our levels. The girls are working very hard and hopefully we will produce some good performances.

Your appointment came on the back of your two-year tenure in charge of India's U-17 women's team. How would you describe your knowledge of India women's game now?

One of the reasons why I took over the senior side is because of my knowledge and my association with Indian football over the past two years. Of course I couldn’t be based in India because of the pandemic. When I was back in early February 2021, I was in Goa and had watched them (the senior team) in a training session. And as always, when you watch from the stands, you always keep thinking what you can do to help them. Then shortly after that, when Ms Maymol Rocky, my predecessor, resigned, the AIFF approached me.

What is the potential of India women team? Are there any talented players who particularly impress you?

We have some players who are playing at a very good level and players with special qualities. It is hard to single one out as all of them are special. This being a team game, it’s not appropriate to specify names at the moment. But some of the girls have been very impressive. I keep on pushing them.

Bala Devi is one of the few Indian women players who plays professional football in Europe. Are you hoping to see more Indian players move to Europe to play with high-level clubs?

Definitely. I have friends in Sweden and all over Europe who keep on asking me about our players, and I keep on telling them that the quality we have in

India may surprise them all. They have played in Sweden, so maybe doors may open for some of them. We also need to remember that under the pandemic situation, it’s hard for clubs from Europe to bring in players from India because you cannot send them for trials. So I earnestly hope our camp in Sweden can throw up some opportunities for them.

What kind of support have you received from the AIFF?

Their support has been exceptional. They are trying to help with everything we ask for. I know we have full support in different areas. Just to give you an example: it is difficult to find teams to arrange games during the pandemic, but we have been travelling. Most importantly, everyone is enjoying their work and we are trying to instill a winning mentality in the squad.

You have had just a few months to prepare for January's AFC Women's Asian Cup. We have been on training camps. The most important is to start working not just in sessions, but also in games. A couple of victories can help us get that winning mentality, and make everyone believe that we can do it. Football is, after all, a mental game. Are you confident of taking India to their first FIFA Women's World Cup in 2023? Let’s take it step by step. Of course, we have a dream, and that starts with us being one among the eight teams in the quarter-finals of the Asian Cup. If we can reach that level, anything can happen. I can only promise everyone that we will go out with a winning mentality and put in a huge effort. And that we will fight with our lives.

What’s your assessment of the current trends in the women’s game and its general development?

The passing game has become so much better over the years. The technical abilities of the players have also increased a lot. And if we look at the organisation, the structure of the teams, and even defending, all of that is much more compact nowadays. Today there are no weak teams. Most teams are very well organised and difficult to score against. Overall, the levels of competition have increased a lot. I started coaching in 1997, so I feel like an old man now (laughs), and at that time we had a team with some good players, some players that were OK and some, if I am honest, who wouldn’t stand any chance to play today. All players are physical nowadays.

Which is your greatest achievement so far in coaching: taking Sweden to third place at Germany 2011, becoming Swedish Manager of the Year award in 2004 or leading Nigeria to France 2011?

It’s hard to rank it all. In fact, it all depends on where you are. In Sweden they always want you to win medals, while in Nigeria we won the AFCON Championship and qualified for the Women’s World Cup. I still nurture a dream, and at the moment it’s seeing India make it to the quarter-finals of this Women’s Asian Cup.