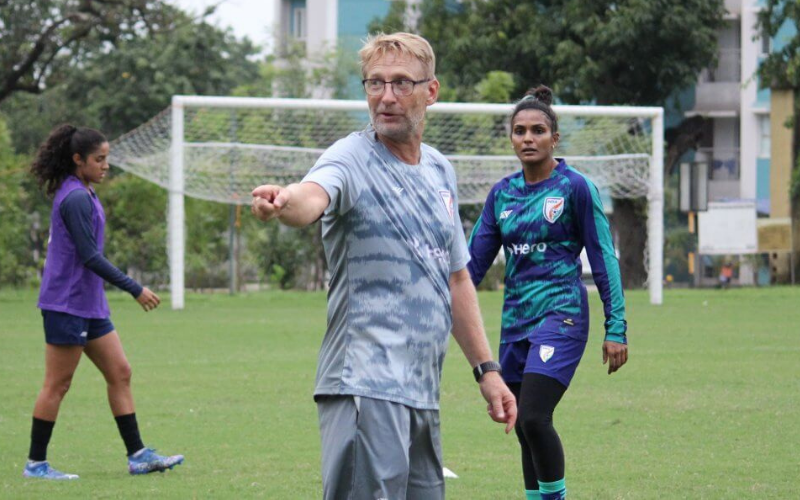 Indian Women’s Team Head Coach Thomas Dennerby says his side is “fighting very hard” to ensure a successful campaign in the AFC Women’s Asian Cup India 2022 which is set to take place next year from January 20, 2022 to February 6, 2022. The Senior Women’s team has been camping in Jamshedpur, Jharkhand since mid-August for the preparation for the continental mega event.

“We have been in camp for three-and-a-half weeks now, and a normal week for us would see the girls go through around 11 training sessions. The training sessions vary -- some are based on strength, some are running sessions, and some are football sessions,” said Dennerby. “We also have meetings where we explain tactics to the players, so we are working very hard,” the coach added.

Dennerby, who was earlier in charge of the Indian U-17 Women’s World Cup squad, has an experience of over 30 years in coaching several National squads with much success. The UEFA Pro Diploma Holder had guided Sweden’s Women’s National team to a 3rd-place finish in the FIFA World Cup in 2011, and a quarter-final spot in the 2012 London Olympics.

“The team around me, the technical staff and the backroom staff is also working very hard, and hopefully we will see success in the Asian Cup,” he continued. “We are fighting very hard.”

With the current pandemic situation, the senior women’s national team is perhaps the sole batch which is undergoing a camp currently with aid from the Government of Jharkhand, who have stepped in to provide training facilities, and a secured bio bubble environment for the players to train in. Impressed by the facilities, Dennerby was quick to thank the Jharkhand Government.

“We are very happy with all the support that we are getting here in Jamshedpur. The facilities are excellent, and we can avail the training pitches, gyms and pools any time we want. I’d like to thank the Jharkhand Government on behalf of the entire team,” Dennerby, who coached Nigeria to the 2019 FIFA Women’s World Cup, and won the AWCON Award 2018, expressed.

Asked about the aim for the team in the AFC Asian Cup, Dennerby stated that a run to the quarterfinals on the continental stage could be termed as a success.

“I think we have a good squad already, and we have different types of players. Some have speed, some are strong, some are good in one-vs-one situations. We will definitely make the effort to reach the knockout Stages, or the quarter-finals. That would be big for us,” said Dennerby. “We know that we will have some tough opponents along the way, but we will give it our best.”

The 62-year-old lamented the current situation which is preventing competitive International Friendlies as preparation for the AFC Women’s Asian Cup.

“To play matches is also important for us. But as we all know, the situation with COVID has made things tougher. Many countries have red-flagged India, so the job becomes harder. Also, we need to remember that it’s difficult for other teams to come to India and play,” he said. “We are working hard to arrange Friendlies to get ready.”