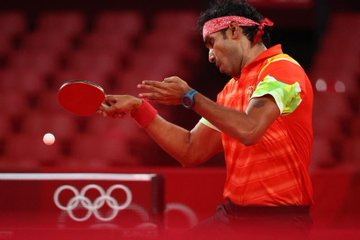 A very few moved on while a number of contenders bid farewell.

Two of Indian women headlined Monday’s events at the Tokyo Games as Bhavani Devi created history to become first Indian fencer to win a game at the Olympics before falling to a French opponent Manon Brunet, who was a semi-finalist in Rio Olympics, in second round; similarly, Manika Batra, who became first India paddler to reach the 3rd round in a singles evet before ousted by a higher-ranked player.

Here is a look at who impressed and who had a day to forget.

Finishing was the difference, as the Indian women's hockey team suffer 2-0 loss against Germany.

Bhavani Devi became the highlight of the day as she won India's first-ever fencing match at the Olympics before she was ousted.

The run for India's tennis contingent ends at the Olympics as Sumit Nagal loses 6-2, 6-1 to World No 2 Daniil Medvedev in the second round of men's singles.

#Tokyo2020 #TeamIndia #Sailing
Laser Radial Women Race 3 & 4#NethraKumanan did brilliant in Race 3 finished 15th but disappointing in Race 4 finished 40.
After 4 races she was placed at 28th rank with 64 net points & 104 total points with 6 races to go for Medal race on Aug 1. pic.twitter.com/6WYXr5MXqJ

Ashish Kumar loses to China's Erbieke Tuoheta 5-0 in the Round of 32.