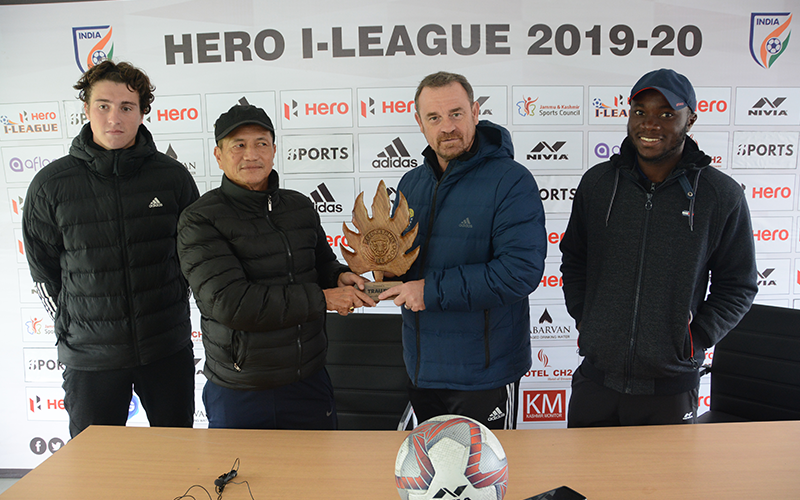 Hosts Real Kashmir FC come up against Tiddim Road Athletic Union (TRAU) FC of Manipur on Saturday, March 14, 2020, in a midtable Hero I-League clash with the battle for the second spot set to heat up in the days to come, with the title having been already bagged by Kolkata giants Mohun Bagan.

The game kicks-off at 2pm as at the TRC Ground in Srinagar and will be broadcast LIVE on 1Sports and streamed online on the FanCode App and 1Sports Facebook page.

The Snow Leopards lie fourth in the league with 22 points from 15 games while TRAU are fifth with the same number of points, but having played two games more. Nothing but a win will satisfy both sides on Saturday.

Kashmir’s Scottish coach David Robertson was understandably taking things one day at a time saying, “Even though I feel we had a very inconsistent season, we still find ourselves in with a shout for second place, but almost every team is eyeing that position. We still have five games left and it will be tough, such is the competitiveness and standard of the league.”

That inconsistency is particularly reflected for Real Kashmir at home form this season where they have notched up just three wins out of seven games and lost two others. Saturday’s game will be their fifth on the bounce at home and they go into the game having been beaten by Quess East Bengal in the previous encounter.

TRAU, on the other hand, will be buoyed by their win at home in their last clash against Indian Arrows. That was their second win in as many games after having beaten former Champions Churchill Brothers.

Their talisman and captain Princewill Emeka, who has struck three times this season, reflected that confidence, saying, “We have started to get things together again and we know that if we keep doing the right things, we have it in us to beat any team in this league. We are going to go with the attitude of winning three points.”

That is easier said than done and Srinagar is known to be a tough away game and Kashmir on their day can really overpower any opponent with their relentless and tough style.

The home side will be further hamstrung on the day with two key contributors in Danish Farooq and more importantly Kallum Higgingbotham having to miss out due to suspensions, and that is an advantage TRAU will surely look to drive home.

It should be a thrilling game of football in Kashmir yet again.

Who do you think will win the mid-table clash?