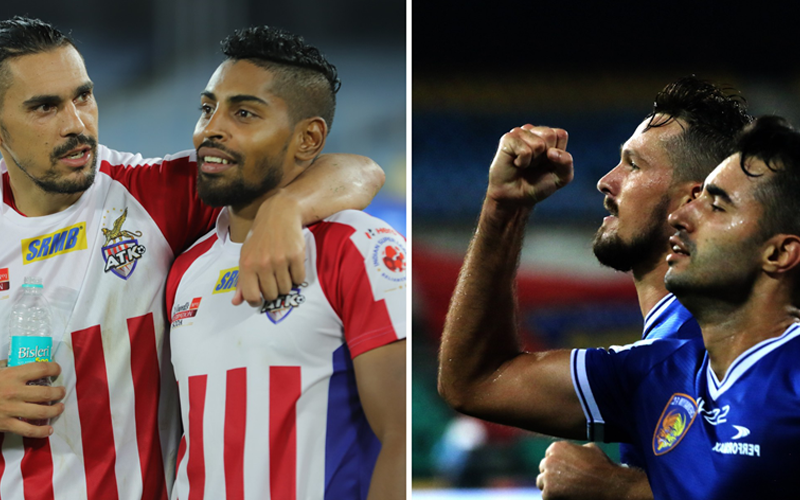 ATK and Chennaiyin FC are chasing their third Hero Indian Super League crown, and leading the charge for the outfits will be two potent strike-forces who have scored a combined staggering 33 goals this season.

Incidentally, behind the teams’ potency in front of goal are two partnerships that have set the league alight. For ATK, it is the electric combination of Roy Krishna and David Williams. For their opponents, it is the guile and persistence of Rafael Crivellaro and Nerijus Valskis.

The battle between Krishna-Williams and Crivellaro-Valskis will most definitely have a huge impact on which team becomes the first-ever to lift the trophy three times.

Krishna and Williams are no strangers to each other, having already struck up an understanding during their time at Wellington Phoenix in the A-League before making their move to Kolkata.

They have continued their partnership in India as well, combining to deadly effect as ATK finished second in the league stage. They both feed off each other as the two strikers in Antonio Habas’ system and were instrumental again in the play-offs against Bengaluru FC. With ATK needing to score three goals at home, Krishna scored one and Williams hit two as ATK booked their spot in the final.

“Football is not just a one-man game. I am just playing my part. Everyone has played their role in the team's success. I am enjoying playing alongside Williams and the number of goals between us proves that things are positive. We have played together in A-League and that experience has helped here," said Krishna.

Krishna is in the running for the ISL Golden Boot award. He has scored 15 goals so far and just needs one more to overtake Bartholomew Ogbeche who also has 15. He also has five assists to his name. David Williams has scored 7 goals and has four assists despite missing a few games due to injury.

Rafael Crivellaro and Nerijus Valskis, on the other hand, have no prior connection but the two hit it off after an initial hiccup. Chennaiyin scored no goals in their first four matches before going on to score 38 in their next 16. Twenty-one of those have come from Valskis (14) and Crivellaro (7).

While the Brazilian performs a creative role, sitting behind Valskis, he is no stranger to audacious goals. He can dribble, ping defence-splitting passes and is a huge threat with the set-pieces, something from which Valskis has benefitted far too often.

The Lithuanian, on the other hand, is the embodiment of persistence. He works hard as the focal point of Owen Coyle’s system and is often at the right place at the right moment. But he is an excellent team player and six assists are a testimony to that. Crivellaro, meanwhile, is second only to Hugo Boumous in the assists department with eight to his name.

“He (Rafael) is a very important part of how creative we want to be and the way we want to play. We are a very attack-minded side. He is an important piece in attack, as are Nerijus (Valskis) and others,” said Coyle.

One thing is for sure. With such brilliant forwards pitting their wits against each other in Goa on Saturday, both defences are in for a tough time.