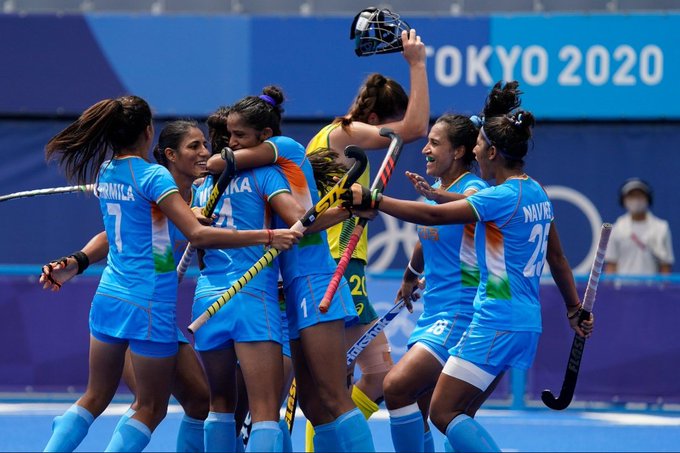 Indian fans are dreaming after their women's hockey team’s 1-o win over favourites Australia that paved the way for their first ever Olympics semi-fina where they are to meet Argentina on Wednesday.

A day after the Indian men’s team entered the Olympic semifinals following a 49-year gap, the world no. 9 women’s side also entered the history books with a phenomenally gritty performance.

Coming into the match, the odds were against India as world no. 2 Australia, a mighty unbeaten opponent, awaited them in the last-four round.

The Indian side, determined to prove a point, produced a strong and brave performance to eke out the narrow win over the Hockeyroos.

Naturally on such a momentous occasion, everyone was desperate to share their thoughts on the morning, so let's dig in to some of the best action from Twitter.

How did a team who didn't win a match at Rio 2016, qualified for back-to-back #Olympics for the first time, lived in lockdown for almost a year & just about reached QF, knock out favourites Australia to reach semis?!
Belief & bodies on line
History & Indian women's #hockey team💙 pic.twitter.com/S5mC7qjP1v

"This is better than any film," says @ZENIADCUNHA.

In 2017 when I interviewed Savita (then vice captain) she was still waiting to get a govt job. I don't know what's the status now but please give these queens whatever they deserve!

Rani Rampal's father was a cart puller, and mother, a maid. They couldnt afford to buy a stick for their daughter as she grew up in Kurukshetra

Undeterred she kept playing - adversities only made her stronger

You are beauty ❤️ 🇮🇳🇮🇳🇮🇳👏
Thank you so much for giving us this moment to see our women team in Semi final pic.twitter.com/bLwE2R6Cr4

Guess it's time for people to find out that I am CRAZY!!!

. @SjoerdMarijne is in tears. What a victory this is for him personally. He has went through so many of rollercoaster of emotions since 2018 yet remained humble and always back to the drawing board. More respect needs to be put on this man's name for what's he done with the team. pic.twitter.com/ZELwmKQDnE

Both these pictures are same #Hockey #Olympics #TeamIndia pic.twitter.com/qzimzj4klS

INSANE!!!!!!Women’s Hockey India beats Australia to move into the semifinal. This is how we roll! All comm boxes go ballistic….@tnrags @RK_sports pic.twitter.com/2zR9VvvHD8

Breathless. Crying. Proud. This is so so much bigger than yesterday, non-hockey folks will never understand. Beating Australia in KO. At Olympics. @imranirampal @savitahockey & Co, you are rockstars. @SjoerdMarijne @waynelombard you have our never-ending gratitude & appreciation

The masterminds behind the miracle of #Ind #hockey at #Tokyo2020 #Olympics #FirstpostInTokyo pic.twitter.com/Bz7RdVN7uy