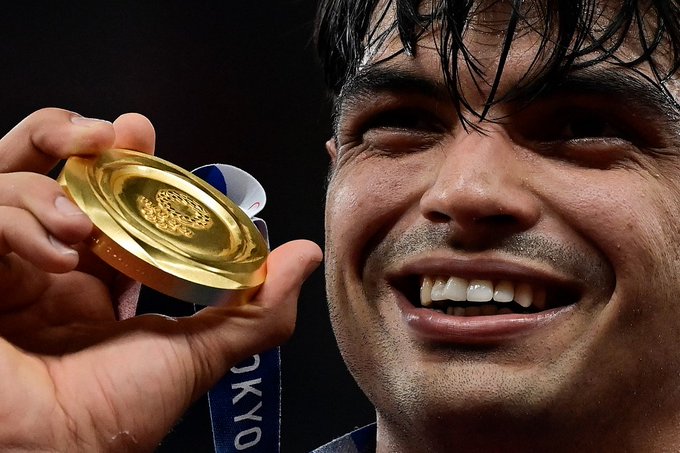 There were huge expectations from javelin thrower Neeraj Chopra in the Men's final category and he didn’t disappoint as he clinched historic gold medal to put India’s medal tally 7, one better than London Olympics.

Chopra became the second Indian after Abhinav Bindra to win an individual Olympic gold medal. His second attempt of 87.58m was enough to bag the gold.

Netizens were ecstatic after Neeraj Chopra's win at the Tokyo Olympics 2020.

Here are some of the best tweets.

Neeraj Chopra of #IND takes #gold in the #Athletics men’s javelin final on his Olympic debut!

He is the first Indian to win an athletics medal and only the second to win an individual medal!@WorldAthletics | #StrongerTogether | #Tokyo2020 | @WeAreTeamIndia pic.twitter.com/zBtzHNqPBE

It's a first gold medal at #Tokyo2020 and a first ever athletics gold for #IND pic.twitter.com/qF4BIXSK93

IT'S JAVELIN GOLD FOR INDIA 🇮🇳@Neeraj_chopra1 is the #Tokyo2020 javelin champion with 87.58m!

He becomes the first Indian athlete in history to win an #Olympics title in #athletics pic.twitter.com/YEj5IaL8ML

The Javelin throw is arguably the most frequently used image for commemorative coins. We need to have one officially released depicting #NeerajChopra @narendramodi @ianuragthakur pic.twitter.com/034m0ISTis

The 🇮🇳 only athlete to win

Where there is a will.. there's always a way!#JaiHind pic.twitter.com/imwXf37yDO