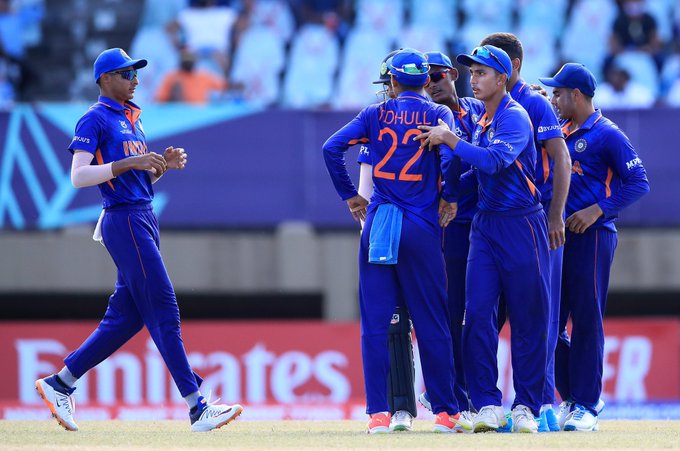 After an impressive win in their tournament opener, India will look to build on the momentum when they take on Ireland in their second Group B match of the ICC Men’s Under-19 World Cup in Tarouba on Wednesday.

Having started their campaign with a 45-run win over South Africa, Yash Dhull and Co will be the firm favourites against Ireland when the two teams clash at the Brian Lara Stadium.

Both India and Ireland have registered wins in their openers. While India beat South Africa, Ireland defeated Uganda by 39 runs.

Dhull anchored the Indian innings against the Proteas as they lost both their openers – Harnoor Singh and Angkrish Raghuvanshi – early after being put into bat.

Dhull added 71 runs with Shaikh Rasheed (31) for the third wicket to resurrect the Indian innings first and then stitched valuable contributions with Nishant Sidhu (27), Raj Bawa (13) and Kushal Tambe (35) to give his bowlers a decent target to defend.

But come Wednesday, Dhull would be looking for more support from his openers to ease the pressure on the middle and lower-order going into the knockout stages of the tournament.

Jalandhar-born left-handed opener Harnoor, who was India’s leading run-getter in the Asia Cup with 251 runs in five games and struck an unbeaten 100 against Australia in the team’s final warm-up game on January 11, will look to get among the runs against Ireland.

Under-19 World Cup: Familiar rivals India and Bangladesh primed for battle once again as they meet in all important quarterfinal