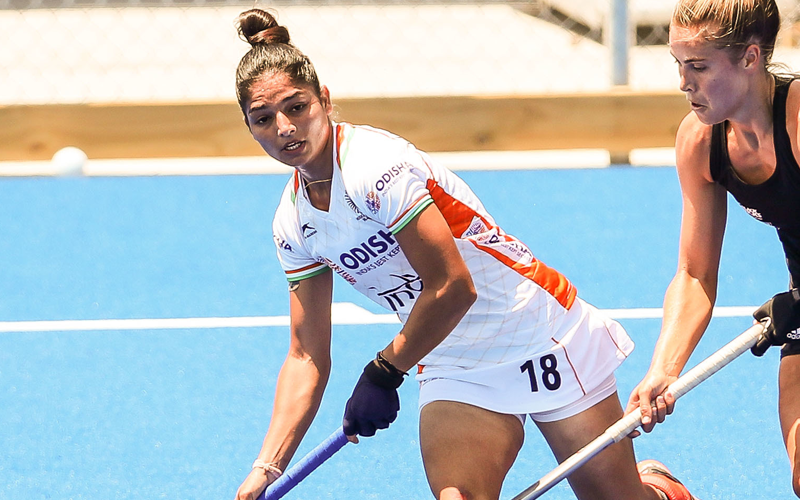 Udita : 'I idolize Rani and Vandana, and I have learned a lot from them'

Life hasn't been easy for the forward from Haryana. Udita lost her father at a very young age in 2015 and since then her mother has been the biggest support in her life.

The Indian Women's Hockey Team has been keeping busy by doing various fitness exercises in their rooms at the Sports Authority of India campus in Bengaluru. They have got a chance to focus on some of their hobbies such as drawing and coloring as well during the nationwide lockdown due to the COVID-19 pandemic.

The Indian Women's Hockey Team Forward Udita has utilized the time to look back at her career so far and expressed that she is very fortunate to be playing alongside senior players like Rani and Vandana Katariya.

"It has been a wonderful journey with the Indian team. I idolize Rani and Vandana, and I have learned a lot from them. They are very experienced players and have always supported me during my time with the team. I am very lucky to have seniors like them. I keep a close eye on how they practice and strategize before matches. I wish I can become like them someday," said the 22-year-old.

Life hasn't been easy for the Forward from Haryana. Udita lost her father at a very young age in 2015 and since then her mother has been the biggest support in her life. As the country celebrated Mother's Day on Sunday, 10 May 2020, Udita thanked her mother for always being there for her.

"My mother is very special in my life. After I lost my father in 2015, my mother has been a big support for all of us (we are three siblings). Our mother took our father's place and was always there for us. I am in the Indian Women's Hockey Team only because of her. She is my friend as well. I have no words to describe how special my mother is for me. So on this Mother's Day, I would like to thank her for always being there for me," said Udita.

'It's amazing where life takes you sometimes' The 22-year-old stumbled upon hockey by sheer happenstance. She used to play handball in her school and enjoyed playing the sport. However, there was a phase when her handball Coach wasn't available for three days in a row. It was then Udita decided to ask her mother if she could take up hockey. And once she learned the sport, she kept moving from one level to the other.

"It's amazing where life takes you sometimes. My handball Coach didn't turn up for three days and then I made the switch to hockey in school. I took to hockey immediately and I understood that I can be good at this sport. I think the U-18 Asia Cup in 2016 was a big turning point for me. I was the Captain of the Indian team and we won a Bronze Medal in the tournament."

"My performances were recognized in the competition and eventually, I made my way to the Senior Indian Team. Being part of the squad for the Hockey Women’s World Cup London 2018 was a special feeling, but I have missed out on some big tournaments. I am watching a lot of footage of my previous games during the lockdown period and noting down some key things that I need to improve once we get back on the pitch. Hopefully, I will improve my skills quickly and become a much better player," stated Udita.