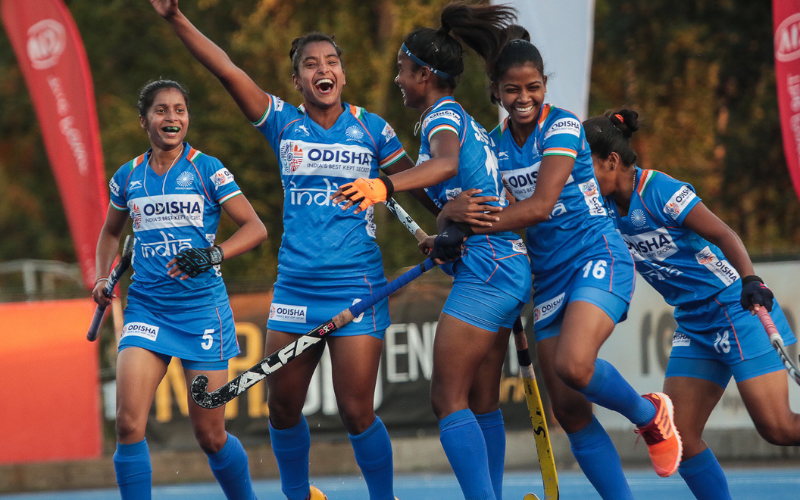 The young Indian side remained unbeaten in the six matches they played in Santiago, Chile, beating the Chile Senior Women's Team on three occasions.

A confident and satisfied looking Indian Junior Women's Hockey Team returned to the country's national capital in the early hours of Wednesday after remaining unbeaten in their Tour of Chile. The team landed here at the Indira Gandhi International Airport after having won five out of the six matches they played during their Tour of Chile, with one match ending in a draw.

"We are very happy to have got the opportunity to resume competitive hockey after the pandemic. It was a very good experience for all the players and members of the support staff and it gives us huge confidence as we approach an important year ahead," expressed Suman Devi Thoudam, who served as the Captain of the Indian Junior Women's Hockey Team.

The Indian team had started the tour by playing two matches against the Chile Junior Women's Team, both of which ended in India's favour with score-lines of 5-3 and 4-2 respectively. "We felt like we were back at our best when we took to the field in Santiago. Whatever we have done in our training sessions, we could execute on the pitch against our opponents from Chile. Everyone was a bit rusty at the start, but we quickly got into a great rhythm, and you could see that with our performances against their Senior team," commented Suman, who plays as a Defender for the Indian team.

The two wins in the opening matches were backed by three wins in four matches against the Chile Senior team. With score-lines of 3-2, 2-0 and 2-1, India registered three wins against the experienced Chilean team, with their second of the four matches ending in a 2-2 draw. "The best part for me about our performances is that, not only were we strong in attack, but were very solid defensively. They tried to use their experience in the forward areas, but we showed great unity and resilience, so I'm really proud of the team," added the 21-year-old.

With the team now on a two-week break, Suman believes they will come back high on confidence and prepare for the rest of the year. "I think we showed great fitness in our matches against Chile, playing six matches in eight days, and still winning five of them. Now, it is about recovering and spending some time with our families, following all the SOPs and guidelines, and then ensuring we are back in the National Camp from 10th February onwards to prepare for this important year."

"We are definitely keeping our eyes on the Junior Women's Asia Cup and the FIH Women's Junior World Cup both scheduled later this year," expressed Suman.