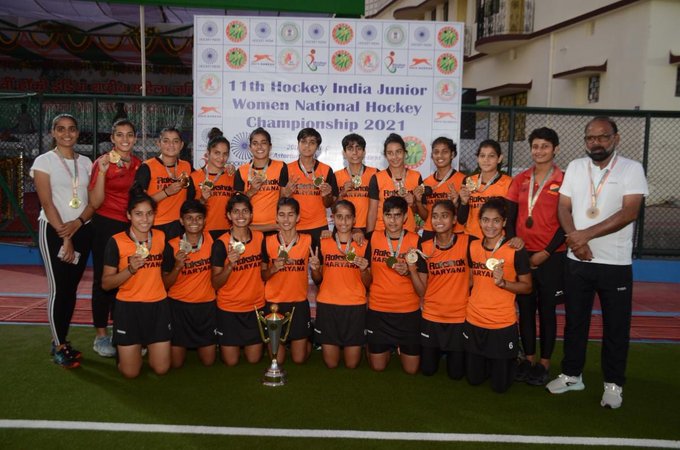 It was a heart-breaking loss for Hockey Jharkhand who began the match well and even made a late fight-back in their quest to win the title in their home ground. But Hockey Haryana played like champions to ensure they remain undefeated in the tournament.

It was Deepika Soreng of Hockey Jharkhand who kicked off the proceedings with an early goal in the 5th minute through a penalty corner. But an infringement by Hockey Jharkhand defenders in the striking gave away two crucial penalty corners for Hockey Haryana who were on target. It was Neelam who scored on both occasions in the 9th and 19th minute to fetch an impressive 2-1 lead.

In the 21st minute, Seema extended the lead to 3-1 when she struck a fine field goal in the 21st minute. This put the hosts on the back foot and they had to work hard to create potential forays into the striking circle, looking for that elusive goal.

Congratulations to all the medal winners from the 11th Hockey India Junior Women National Championship 2021 organised in Simdega, Jharkhand 😍👏

Though Ropni Kumari converted a fine penalty stroke in the 39th minute giving hosts some hope, they couldn't breach the Hockey Haryana defence any further. Though the hosts did well to contain their opponents from scoring another goal in the third and fourth quarter, they couldn't overcome the early set back and had to settle for the runners-up title.

In the Bronze Medal match, Hockey Maharashtra registered a comfortable 6-2 win. Goals were scored by Utkarsha Nana Kale (8', 38'), Kajal Sadashiv Atpadkar (14'), Shivani Sitaram Sahu (20', 53'), Ashwini Kolekar (27') to ensure Hockey Maharashtra sealed the match. For Hockey Chandigarh, Khushdeep Kaur (35', 45') scored twice but couldn't receive much support from her counterparts who failed to stitch together a strong attack and thus, settled for a fourth-place finish.