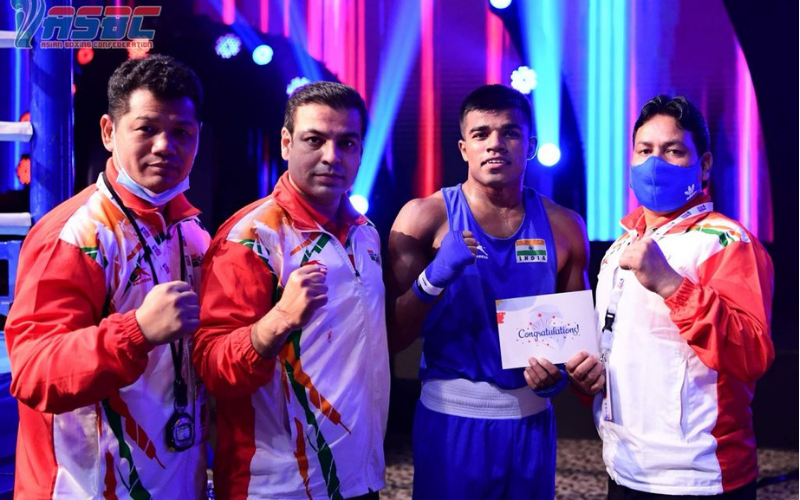 Vanshaj and Preeti made their way into the finals along with four other youth Indians on Day 6 at the ASBC Asian Youth & Junior Boxing Championships in Dubai.

Giving India a perfect start for the day, Vanshaj put up a splendid show against Iran's Faridi Abolfazl and secured a dominating 5-0 win in the men's 64kg semi-final. Vishal further extended the winning momentum in the youth boys' section as he was equally dominant during his victory against Kazakhstan's Dauren Mamyr by unanimous decision.

On the other hand, in the women's semi-finals, Preeti (57kg) and Preeti Dahiya registered contrasting victories in their respective bouts while other two boxers, Simran and Sneha, were given walkovers. Preeti's aggressive approach throughout the match against Nepal's Narika Rai saw the referee stopping the contest in the third round and declaring the Indian as the winner. However, Preeti Dahiya had to work hard during her narrow 3-2 win against Uzbekistan's Uktamova Rukhshona.

On the seventh day of the prestigious continental event, in which both the age groups—junior and youth—are being played together for the first time, five junior Indian boxers will play their semi-finals. Among boys, Ashish (54kg) and Anshul (57kg) will be seen in action while Vishu Rathee (48kg), Tanu (52kg) and Nikita Chand (60kg) will fight in the girls' category.

The on-going Asian Championships is the much-needed competitive tournament for the promising young talents at the Asian level after a gap of almost two years, lost due to pandemic. India boxers have already assured the country of more than 25 medals in the event which has been witnessing competition in the presence of pugilists from strong boxing nations such as Kazakhstan, Uzbekistan and Kyrgyzstan to name a few.