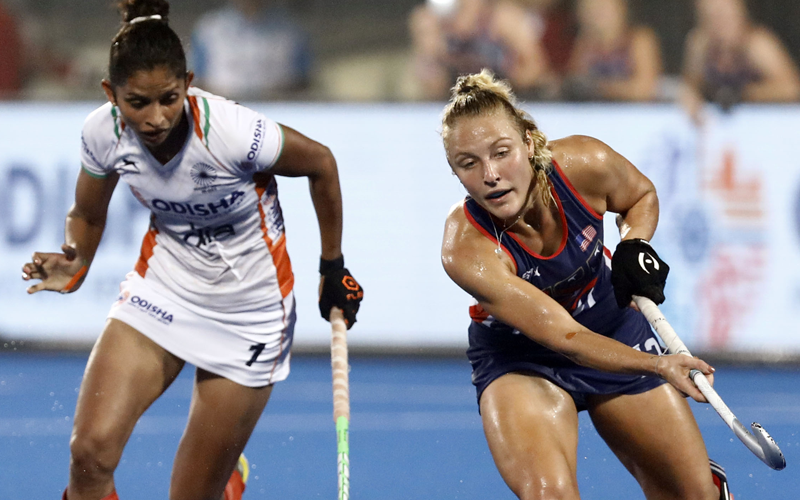 Very keen to become one of the best finishers in the world, says Indian Women's Hockey Team Forward Navjot Kaur

Indian Women's Hockey Team Forward Navjot Kaur has been part of many memorable victories for the national side since making her debut in December 2012 against New Zealand. The striker from Haryana has become a key member of the Indian side in the last few years and has been given the vital job of finding the back of the net every time she is presented with an opportunity to do so during matches. Navjot expressed that she is enjoying the finisher's role for the Indian team.

"The finisher's role is very crucial for any hockey side and I am delighted that I have been given the opportunity to execute the chances created by my teammates. There is certainly a lot of pressure that comes with the job, but I have certainly enjoyed the challenge so far. I want to keep working hard on the techniques of finishing and hopefully, I will become the best finisher in the world one day. It's amazing to be in a position to convert goal-scoring opportunities for the team," said the 25-year-old.

Navjot, who has played 172 matches for the Indian team, spoke about some of the best moments in her career so far.

"Being part of the Bronze Medal and Silver Medal-winning teams at the Asian Games 2014 and 2018 respectively has to be on the top of the list, however, 2019 was one of the most crucial years for us. It was absolutely brilliant to be part of the victorious team at the FIH Women's Series Finals and then we followed it up by booking a place in the Tokyo Olympics after defeating USA in the FIH Hockey Olympic Qualifiers later in the year. It was an amazing year for us and hopefully, we will go on to win the biggest of tournaments in the upcoming years," said the Forward.

Navjot, who hails from Kurukshetra, Haryana, is currently living her father's dream as he always wanted one of his three children to pursue a career in sports.

"I wouldn't have been able to reach where I am today without the support of my parents and especially my father, who encouraged me to take up hockey in school. He always dreamed about one of his children becoming sportspersons and I am really glad that I have been able to fulfil his dreams. I hope I keep improving my game in the future and always make my parents proud through my achievements on the field," said Navjot.