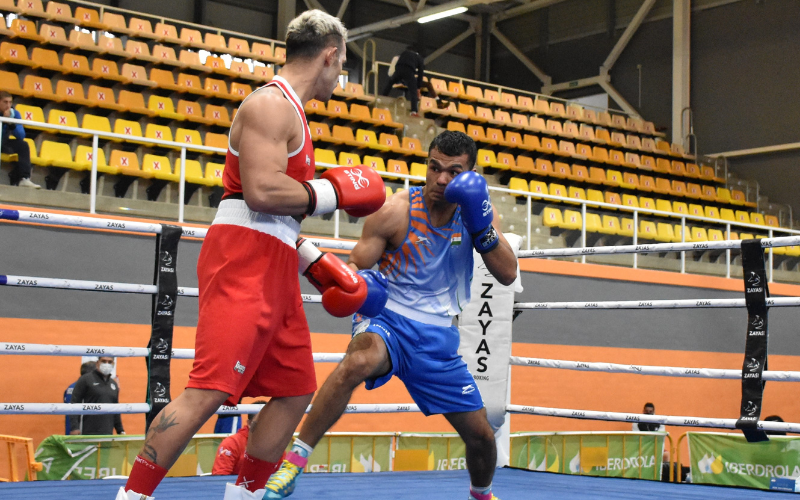 10 Indian boxers in action on Day 4 in last-four stage.

Playing to his reputation, Vikas Krishan Yadav outpunched the 2012 London Olympic Games bronze medallist Vicenzo Mangiacapre to progress into the men's 69kg semi-finals on the third day at the Boxam International Tournament in Castellon, Spain.

The Commonwealth Games champion Vikas, who has already secured a berth for his third Olympics in Tokyo, got rid of Italian Mangiacapre in a 3-2 split decision. Apart from Vikas, five more Indian men boxers registered victories in their respective quarter-final bouts to assure India six medals in men's category at the 35th edition of the tournament.

The 2018 Commonwealth Games bronze medallist Mohammed Husamuddin notched up a 5-0 win against Italy's Simone Spada in the 57kg while, World Championships bronze medallist Manish Kaushik, who's making return in the ring after a year, managed 4-1 win against Safiullin Zakir of Kazakhstan. 2019 Asian Championship silver medallist Ashish Kumar (75kg) and Sumit Sangwan (81kg) also made their way into the semi-finals with 4-1 wins in their respective matches. While Kumar beat Italy's Remo Salvatti, Sangwan won against Belgium's Ziad El Mohor. Satish Kumar, the first Indian boxer to qualify in +91kg at Olympics, is the other Indian to advance into the semi-finals. He outclassed  Denmark's Morten Givskov Nielson 5-0.

Amit in action during his 2-3 loss against Spain's Gabriel Escobar at the Boxam International Tournament in Castellon, Spain late on Thursday

With 10 medals already confirmed, India's four women and six men pugilists will look to seal themselves a place in the gold medal match as they will play their semi-finals late in the night on Friday. In the women's category, Olympic bronze medallist Mary Kom (51kg), Jasmine (57kg), Simranjit (60kg) and Pooja Rani (75kg) will be seen in action while all six men boxer, who won on the third day, will play their respective last-four clash late on Friday.