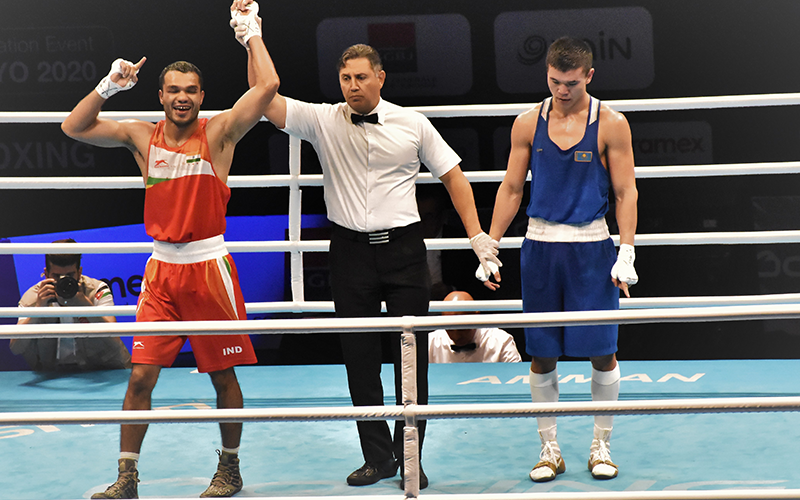 Commonwealth Games gold medallist Vikas Krishan (69kg) and former World Championships bronze medallist Simranjit Kaur (60kg) showed a lot of determination in advancing to the Asian/Oceanian Olympic Qualifiers in Amman, Jordan on Tuesday as Sachin Kumar (81kg) won the first of his two box-off bouts to keep India in the hunt for the highest-ever Olympic quota haul. But the biggest disappointment of the day were the losses suffered by six-time world champion Mary Kom (51kg) and World Championships silver medallist Amit Panghal (52kg), both of whom had to settle for the bronze as did Lovlina Borgohain (69kg) and Pooja Rani (75kg).

Indian boxers have so far dominated the Asian Qualifiers by bagging 8 quotas brought home by Mary Kom (51kg), Pooja Rani (75kg), Ashish Kumar (75kg), Simranjit Kaur (60kg), Satish Kumar (+91kg) besides Panghal, Krishan and Borgohain. India currently shares the top position with Kazakhstan out of 10 nations with chances of topping their 2012 haul of 8 quotas as Sachin Kumar and Manish Kaushik (63kg) are still in contention due to their box-off opportunities.

Indian boxers, who failed in their quest at the Asian Qualifiers, will get one more opportunity to realize their Olympic dream at the World Qualifiers set to be held in Paris in May.

Krishan’s steely resolve stood out on a day of mixed fortunes for the Indian contingent. Despite suffering a cut below his left eyebrow, the former Asian Games gold medallist refused to bow out and gave his all to knock out the second seed and World Championships bronze medallist Ablaikhan Zhussupov of Kazakhstan in a 3-2 verdict.

Krishan will face Eishaih Hussein of Jordan in the final tomorrow.

A day after booking her second appearance at the Olympics, Mary Kom put up a gritty fight against the reigning Asian Games champion Yuan Chang but it was not to be as the Chinese prevailed 3-2 in a closely-contested bout.

Sachin Kumar (81 kg) defeated Manh Cuong Nguyen of Vietnam 4-1 in the first box-off bout and will next face Tajikistan's Shabbos Negmatulloev in the final box-off bout tomorrow for the Olympic quota.

Can Vikas Krishan and Simranjit triumph in the final hurdle?