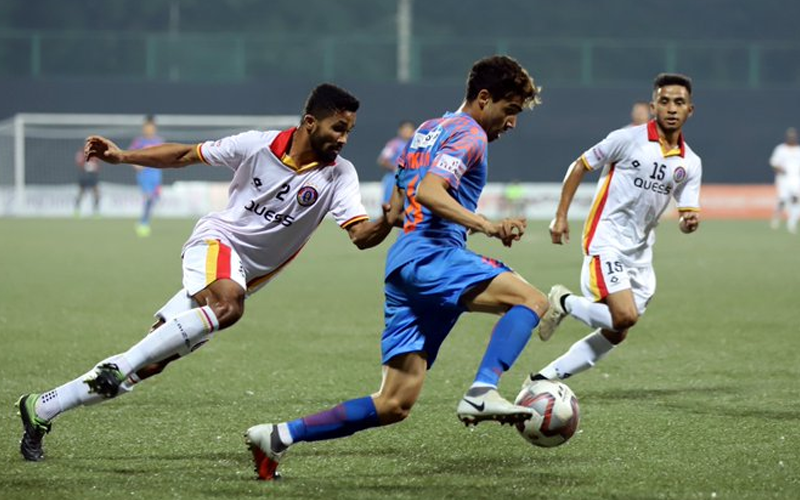 Vikram Partap Singh believes his improvement at Indian Arrows this season is down to Venkatsh’s focus on “situation games,” as he close to joining ISL club Mumbai City FC.

Vikram Partap Singh was among the shining lights of the Hero I-League 2019/20 season -- featuring in 14 matches for the AIFF's developmental side Indian Arrows. The young gun, playing just his second season at the senior level, was the highest scorer for the Arrows and had the second-most key passes for his team, and credited his development to an “increase in maturity.”

Recently, the 18-year-old attacker said: "I feel I improved a lot this season. With so much quality game-time in the Hero I-League, I have become more mature in reading situations -- such as picking the right moments to take on defenders, identifying their individual weaknesses and creating one-versus-one situations, etc."

Vikram was the captain of the Indian team that reached the quarter-finals of the AFC U-16 Championship in 2018 and found the net against Vietnam in the opening clash. Subsequently, he was drafted in the Indian Arrows side for 2018-19 Hero I-League season as he went on to make his debut at senior level and made 13 appearances in the campaign -- scoring in a 3-0 win over Shillong Lajong.

Comparing the two seasons, Vikram felt that the first campaign made him realise the steep difference between junior and senior football, and that the experience has made him a tougher and better player.

"The more you play, the more you learn. I am grateful for the opportunity to play in the Hero I-League so early in my career. In my first season, I was not that mature and was finding it hard to play against experienced players,” he stated.

"I had come straight from the U-16 team and there's a massive difference between the two. At first, I used to think I could dribble past everyone and score -- like at the junior level. But then, I had to tell myself 'It doesn't work like that at the top level'," he remarked.

'I enjoy playing on the right wing the most'

Another key learning for the youngster from Chandigarh has been the importance of playing as a unit, and gelling and developing as a group -- something that Arrows Head Coach Venkatesh Shanmugam stressed upon a lot, as Vikram informed.

"Venkatesh sir is a firm believer in teamwork and a lot of the work we did was on growing as a team. In training, we would have drills such as 'situation games,’ where you have to play with each other's support. Off the pitch too, he made sure that we stayed as a group at all times and stood by each other. We developed a really strong bond in the team,” he expressed.

"It reflected on the pitch as well. All of us players have developed with each other's support. It is not possible for one player to do everything and I developed a great understanding with my fellow midfielders and attackers about when to play wall-passes, when to switch flanks or when to make a supporting run," he added.

From striker to winger, Vikram played in a number of positions across the attack over the season and the numbers have surely been worth noting. Apart from being his team's highest scorer, he suffered 3.2 fouls per 90 minutes in the campaign (highest in the league) and made 37 successful dribbles (joint second-highest by an Indian player) -- a testament to his dribbling abilities.

His work-rate and stamina make him a valuable asset without the ball as well, with Vikram attempting the most challenges (420) and the second-most attacking challenges (105) in the League. Talking about his versatility and all-round game, Vikram credited coach Venkatesh for utilizing him in different roles and helping him his expand his repertoire.

"I played the entire season in a number of positions. I enjoy playing on the right wing the most but the coach used me as a striker as well and then in other areas. I also played 3-4 games on the left flank and even as a midfielder in a couple of matches. It helped me gain more experience and improve in-game understanding and intelligence, as I got to see the game from different viewpoints," he stated.