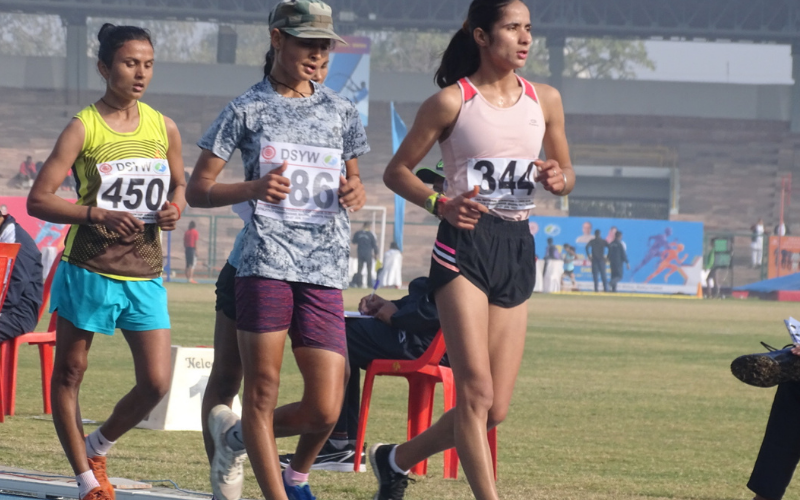 Reshma Patel, 16, marked her 10000m Race Walk debut with a National U20 Record in a time of 48 minutes 25.90 seconds to showcase her talent and express her gratitude to her brother and her coach with a remarkable victory on the second day of the National Federation Cup Junior U20 Athletics Championships at the TT Nagar Stadium on Tuesday.

Tamil Nadu's National U20 champion Jeswin Aldrin uncorked a personal best of 7.51m with his opening effort and endured an intense long jump battle with Bhupendra Singh (Haryana) before he ran out a winner. Bhupendra Singh's 7.44m on his second attempt ensured that the pair would carry the fight till the last set of jumps.

Kolhapur lad Vikas Anand Khodke broke the meet record in the 110m Hurdles, clocking 14.00 seconds in the final, winning by two-hundredths of a second from Usaid Khan of Uttar Pradesh. Vikas Khodke clocked a better time than the National U20 records with 13.80 seconds in the heats but the wind of 3.3m/s meant that J Surendhar's mark of 13.92 seconds (Bengaluru, 2010) stood.

Madhya Pradesh's Ikram Ali Khan fouled three of his six throws but his best effort of 55.07m earned him gold in the discus throw. For someone who was fourth in the NIDJAM 2016, Ikram Ali Khan has come a long way. With Kerala's Fasil Feroke Ahammed Seema pulling up injured midway through the race, three hurdlers from the faster of the two heats claimed the podium places.

Earlier, in what turned out to be an amazing race, each of the podium finishers in the women's 10000m Race Walk  improved upon Priyanka Goswami's existing National record time of 49:16.51 set in 2014 and the top five finishers bettered her meet record time of 50:41.29 set in 2015. Yet, it was Reshma Patel's unruffled performance that saw her claim the top prize.

In the 2019 National Junior Championship in Guntur, she broke the Under-16 3000m Race Walk National mark in 14:14.83 to present the first evidence of her talent. Her brother, distance runner Inderjeet Patel who works in ONGC in Dehra Dun moved her from Allahabad a few years ago – as Prayagraj was then known – so that she could train with celebrated coach Anoop Bisht.

Interestingly, her victory came against the more experienced Munita Prajapati and Baljeet Kaur Bajwa, who had beaten her elder sister and inspiration, Roji Patel, in the 10km event in the National Race Walking Championships in Ranchi in February last year. She is also hoping to catch the eye of the Khelo India talent scouts so that she can secure a scholarship.