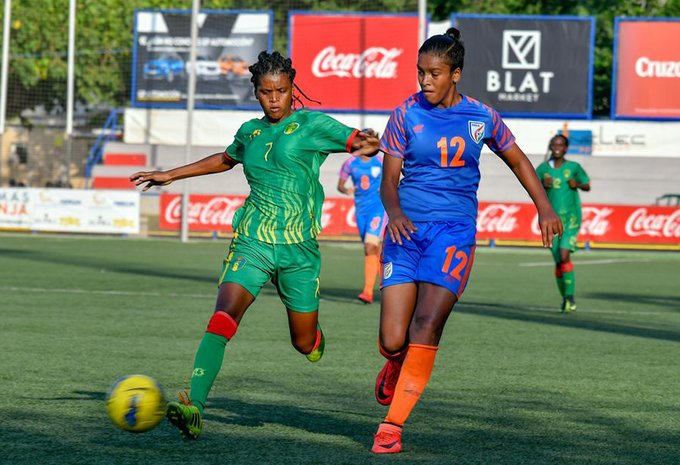 At just 19 years of age, Manisha Kalyan has established herself as one of the key members of the Indian Senior Women's National Team. With her being named the AIFF Women’s Emerging Footballer of the Year 2020-21, the youngster stated that the Award inspires her to keep moving forward together and inspire the next generation of girls.

"I used to play in school and at state-level. It was only at 15 or 16 that I realised that can make my way up to the Indian National team. I want that the players who are younger than me they have the right exposure from the very start. Every player I interact with, I tell them that the future of Indian football is bright and getting this Award can serve as an inspiration for them," she quipped.

Manisha, who has also represented India at U-17 and U-19 levels, continued: "It feels really nice to win this Award. I want to thank the AIFF for bestowing this honour upon me. I have always looked to plan my career step-by-step and winning the Emerging Player Award is something that I always wanted. I hope to keep doing better from here and keep working hard to help my team."

The forward is honoured to share the spotlight with none other than Bala Devi, who won the AIFF Women’s Footballer of the Year 2020-21 award, and Manisha recalled how she always idolized Bala and wants to follow in her illustrious footsteps.

"When I was just starting out, my seniors in Punjab told me about Bala-di and her game. Since then, I have always wanted to meet her and share the pitch with her. I was fortunate that I even became her room partner at a camp and I was really happy about that. I have learned so much from her and hope that I can play abroad like her if the opportunity arises," she smiled.

"I saw her play at the Nationals along with other National Team players like Aditi-di, Dalima-di, Asha-di, Sangita-di and Sanju-di, and compared my game to theirs. Accordingly, I started preparing myself as I wanted to reach that level and play for the national team."

Manisha, who hails from Muggowal, a village in the Hoshiarpur district in Punjab, thanked her family and dear ones for their support in her journey so far.

"My parents have always been supportive of me playing football and have always encouraged me to move forward. One more key figure has been Manu-didi, my sister who lives in Delhi. She has helped me in every step of my journey and always motivated me. Everyone in my village loves football and has encouraged me throughout. When I was selected for the India camp for the first time, all of them were very happy and gave me their blessings and confidence," the 19-year-old shared.

Manisha, who also won the Emerging Player award at the Hero Indian Women's League 2019-20 and went on to win the title with Gokulam Kerala FC, expressed that her full focus now is on doing well for India at the upcoming AFC Women's Asian Cup 2022 in January.

"The main target for me now is preparing for the AFC Women's Asian Cup. It's a great opportunity for all of us and everyone is worked extremely hard to get ready and give our best," she stated.