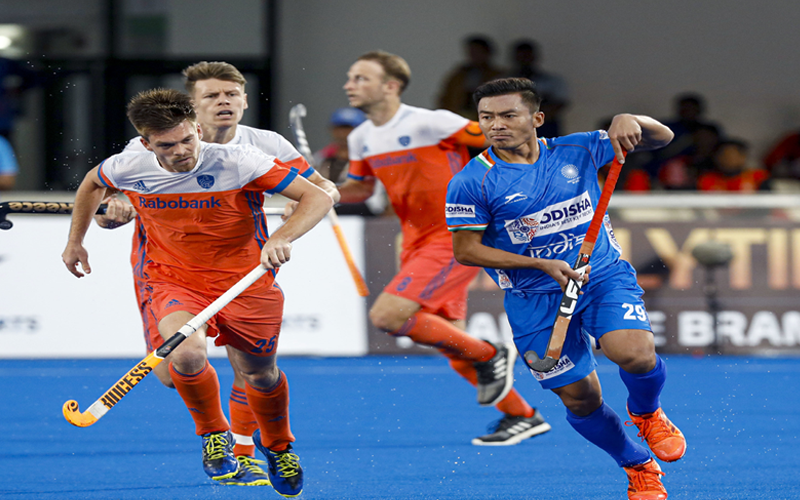 India's work ethic in the midfield has proved to be the difference in their initial four matches of the FIH Hockey Pro League 2020 which sees them sit on the third spot in the table with eight points from four matches, and with the return of experienced midfielder Chinglensana Singh Kangujam, the team has certainly been helped. However, it was only in December 2018 when the 28-year-old had last represented the country when his team was knocked out of the FIH Hockey Men's World Cup by The Netherlands in the Quarter-Finals. The Arjuna Awardee sustained a long-term injury to his right ankle in early 2019, which saw him miss all the competitions held last year.

"After having participated in the Hockey India Senior National Championship in 2019, I started feeling minor pain in my right ankle, but when I finally went for some scans, I was told I had fractured it. The initial few weeks were obviously very tough for me because there were thoughts in my head which said I may not be able to play for India again. But the support that I received from my family, teammates and Coaches was exceptional," said Chinglensana.

"I was in rehab, and would watch my teammates play on the pitch, and I would feel very sad because playing hockey is something that I have loved all my life. However, slowly I recovered from the injury, and my initial target was to return for the FIH Hockey Olympic Qualifiers in November 2019 to help my team, but there were a few setbacks along the way," he added.

The 28-year-old finally made a comeback into the team during the FIH Hockey Pro League 2020 matches against The Netherlands in January 2020, and calls it "one of the best moments of my life."

Having earned more than 200 International Caps for the country, Chinglensana says he enjoys the responsibility of grooming the younger players, and wants to help the team in bagging a podium finish at the Tokyo Olympics. "Having made a comeback to the team now at the FIH Hockey Pro League 2020, I am really delighted because I can help the team from within, and can also guide the younger players. We have some fantastic young talent who are ready to take on the world, and with Vivek winning the FIH Rising Star of the Year Award, and the likes of Raj Kumar Pal and Hardik Singh also trying to make a case for themselves, it gives me immense satisfaction to be able to help them with little tips and knowledge about the game," said the midfielder from Manipur.

Speaking on his team's upcoming opponents in World No. 2 Australia, Chinglensana said that the belief within his team has certainly grown with the recent performances. "I think our performances against Netherlands and Belgium have been quite satisfying for everyone. We have played according to the strategies that our Chief Coach and the support staff have made, and I think the execution on the field was there for everyone to see. Now we are completely focused on Australia, who are a good side. They like to play a very aggressive brand of hockey, but we are very well prepared to tackle that, and we all believe that if we play according to our plans, we will definitely end up winning both the matches," Chinglensana signed off.

India will take on Australia on 21 and 22 February at 1900hrs IST at the Kalinga Hockey Stadium in Bhubaneswar.