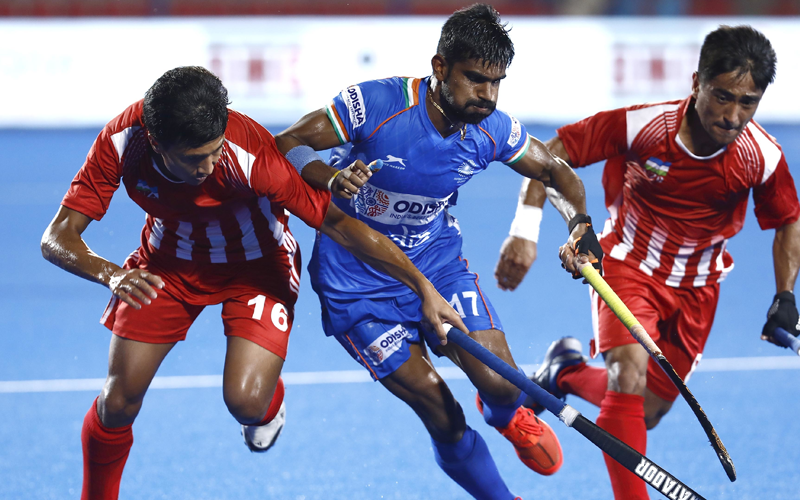 We youngsters have another year to prove ourselves to get selected in the Olympic-bound squad, says India midfielder Sumit

The FIH Junior Men's World Cup winner says the team continues to remain focused on fitness despite hockey training being suspended due to lockdown.

Having begun the year on a positive note with confidence-invoking performance against the World's top 3 teams in the FIH Hockey Pro League, the Indian Men's Hockey team had set course to what would have been a memorable outing at the Tokyo Olympics.

"I remember when we won the Sultan of Johor Cup in 2014 and steadily kept improving performance in the lead up to the FIH Men's Junior World Cup in 2016, the team had started believing that we can win the Gold. That self-belief and attitude is what eventually helped us win the title. We felt that same belief after performing well against the Netherlands, Belgium and Australia. Every single player in the core group believes we can finish top 3 in the Olympics," stated India midfielder Sumit, who was also part of the 2016 Junior World Cup winning squad.

He recalled that the team was in the middle of intense training when the nation-wide lockdown due to Covid-19 pandemic abruptly halted their training. "We were in excellent rhythm when training was suspended due to lockdown. But the team feels we are better off in SAI Centre, Bengaluru where we still get to come out of our rooms and use running track and do core exercises. I can't imagine being stuck at home back in Haryana with no option for any basic fitness training," expressed Sumit, who played a key role in India's midfield during their campaign against the Netherlands earlier this year at the FIH Hockey Pro League.

The midfielder admits these are difficult times for any athlete. "This is probably the first time that we have not trained hockey in so long. Getting back to that fine rhythm will take some time but since we are focused on maintaining fitness, we are in a better position than many of our opponents. From here on, in the lead up to the Olympics next year it's important to stay fit and stay injury-free," stated Sumit who was out of action for nearly six months in 2019 after a wrist injury in June during the FIH Series Final in Bhubaneswar. Though he made a fine comeback against the Netherlands in January this year, he suffered a hamstring injury ahead of the matches against Australia.

Sumit further added that the team often discusses about the Olympics and their chances. "Olympics is the ultimate dream and the postponement has not changed our belief of a top-3 finish. We get more time under Chief Coach Graham and personally he has instilled a lot of confidence in me. He encourages me by saying I am versatile and can play in any position and emphasises I need to focus more on attacking hockey and positioning inside circle. We youngsters have another year to prove worthy to make the team for Olympics," Sumit said.