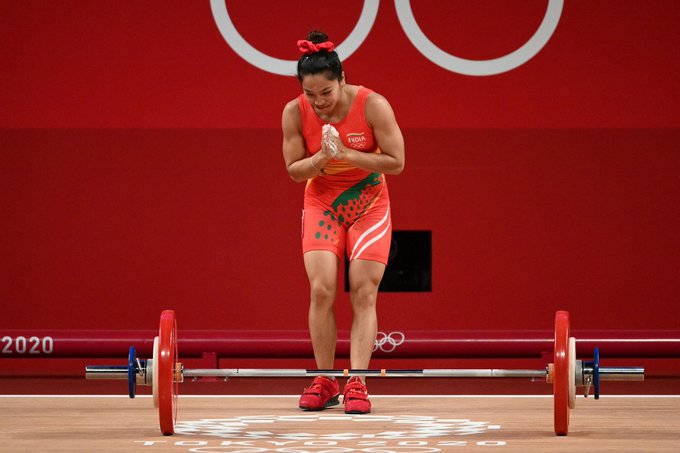 Mirabai Chanu ended India's 21-year wait for a weightlifting medal at the Olympics by clinching a silver medal in the 49kg category to open the country's account here on Saturday. The 26-year-old lifted a total of 202kg (87kg+115kg) to better Karnam Malleswari's bronze in the 2000 Sydney Olympics.

With this, she exorcised the ghosts of the 2016 Games where she had failed to log a single legitimate lift. The gold went to China's Hou Zhihui with an effort of 210kg (94kg+116kg) , while Aisah Windy Cantika of Indonesia took home the bronze with an effort of 194kg (84kg+110kg).

Considered her weakness in the run up to the marquee event, Chanu attempted 84kg in her first snatch attempt. The Manipuri took her time and cleanly heaved the barbell.

That's how you go into the history books! 🙌

She lifted 87kg in her next attempt and raised the weight to 89kg, which was one 1kg more than her personal best of 88kg that she had lifted at the national championship last year.

However, she was unable to better her personal best and settled for 87kg in the snatch event only behind leader Zhihui, who created a new Olympic record with an effort of 94kg.

The Chinese lifter also holds the world mark (96kg) in the category.

In the clean jerk, Chanu, the world record holder in the section, lifted 110kg and 115kg in the first two attempts.

However, she was unable to raise 117kg in her final attempt but it was enough to fetch her a medal and open India's account.

The diminutive Mannipuri broke down after realising that she has secured a medal and hugged her coach in jubiliation.