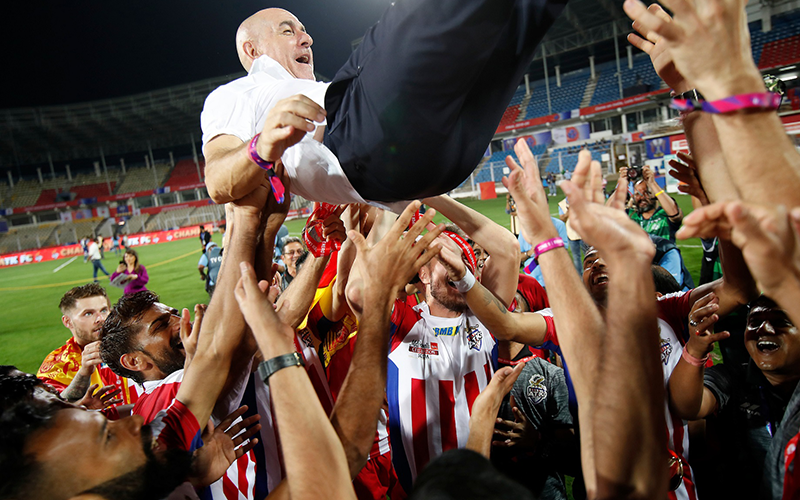 With Habas, success not too far behind for ATK

Javier Hernandez’s brace and Arindam Bhattacharja’s heroic goalkeeping ensured ensured a historic triumph for ATK in the Hero Indian Super League final against Chennaiyin at Jawaharlal Nehru Stadium, Goa, on Saturday. The Kolkata-based club became the only side to win the trophy three times, but those who have followed them since the start are not surprised.

ATK's journey to the trophy started way in the summer of 2019 when they decided to welcome Antonio Habas back as the head coach. The Spanish coach had led the club to their first ISL victory in the inaugural edition in 2014, and after two seasons without trophies, the management went back to adopting the tried and tested approach.

Habas knew how to succeed in Indian football and his valuable experience helped the team on and off the field. He called the shots and assembled a strong squad in pre-season, one that looked favourites to go all the way, even before a ball was kicked.

“The way people (fans) love me, I love ATK. I didn't have a team in June and when ATK contacted me, I immediately agreed to join them because I had a special feeling with ATK from the first season and now I feel like continuing,” said Habas.

Habas’s ability to unite a dressing room full of top professional footballers for a common cause remains striking. ATK projected a united front under Habas and both the Indians and foreigners alike played their part in the team's success this season.

January was an important month for ATK. As the club chased top four, the owners RPSG Group announced the acquisition of a majority stake in I-League club Mohun Bagan. Two months later, ahead of the historic coming together of Kolkata's favourite clubs, both clubs have won the trophies in their respective leagues.

As the champions of Hero Indian Super League and Hero I-League combine to form a new entity, it is safe to say that Kolkata is back on the map as the sporting powerhouse of India.

“Mohun Bagan is a big club in India but we have to work with the same target to be the best club in India,” said the former Atletico Madrid manager.

The club will now be keenly followed by the football aficionados across the country. They will also represent India in Asian club competitions next season and will be confident about a strong performance at the Asian level. With Habas, success is never too far behind.

ISL 2020-21: Honours even as lively Chennaiyin fail to convert chances vs ATKMB

Bengal are back where they belong among 'Indian Football royalty' ?