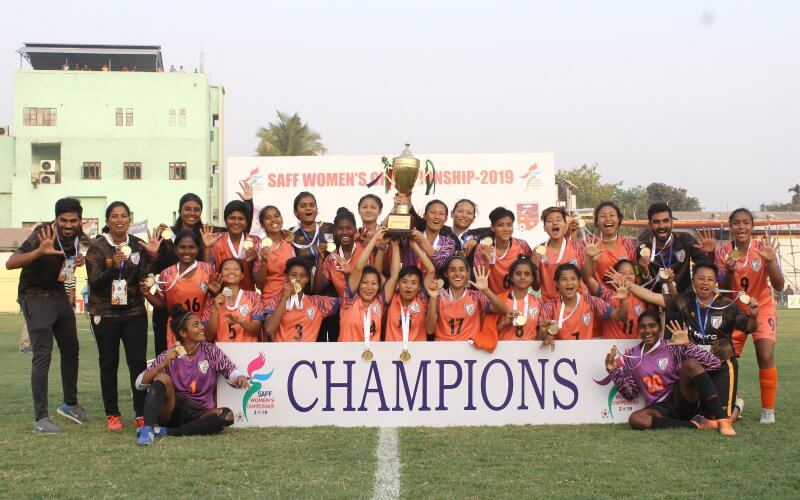 Members of the Senior National Women's Team expressed their delight after India was announced as the host of the AFC Women’s Asian Cup 2022 finals, and spoke about how the mega-event will provide a further boost to the sport in the nation.

Head coach Maymol Rocky stated that she is 'very excited' at the pronouncement and sounded confident that the team will put on a 'good show' when the competition arrives.

She said, "I am very excited that a tournament of this magnitude will take place in India and I thank the AIFF for bringing the Asian Cup to our country. We have one-and-a-half years to prepare for it and I am sure that we will put on a good show. I hope people will come out to support the team and the girls will do the rest."

The Indian side is currently ranked 55 in the world, having won the gold medal in their most recent outing at the South Asian Games 2019 in Nepal and recording draws in friendly games away to Uzbekistan and Vietnam – both of whom are ranked higher.

Maymol added, "People are getting more and more aware of the progress made in women's football in India. The girls will get the opportunity to play against the top countries in Asia and fans will get to see the best teams such as Japan, Australia, Korea and China live in the stadium, which will go a long way to develop interest among young girls and parents."

Captain Ashalata Devi, who was among the three nominees for the AFC Women's Player of the Year 2019, said that getting to play in the AFC Women's Asian Cup will be a 'dream come true'.

"It was a dream to play in the AFC Asian Cup and now that we are hosting it, I am very happy and excited. I would like to thank the AIFF and Women's Committee as they made a lot of efforts to bring the tournament to India. It's a huge step for us and the entire continent's eyes will be on us," the centre-back mentioned.

She also shared a personal anecdote, highlighting the importance of the stage to her and the players.

She said, "Ever since I have been playing football, I have never shown any of my matches to my mother. I was waiting for the right moment and now in 2022, I want my mother to come and watch me play against Asia's best teams."

Goalkeeper Aditi Chauhan expressed her delight at the 'amazing opportunity' and termed it as a 'huge responsibility' at the same time.

"It is an amazing opportunity for us to prove and show our supporters why they should believe us when we say women's team has the potential to play at the top level. There is now a huge responsibility for us to put forward the image that we want our supporters to have of women's football."

Women's football in India has been growing leaps and bounds in recent years and with the FIFA U-17 Women's World Cup 2020 set to kick off in February next year, the effect of these two mega-events back-to-back is expected to give a gigantic push to the game.

According to Maymol, she expects to see a few names from the current U-17 team to step up to the senior ranks in time for the premier continental event.

"I am confident that some players from the U-17 team will make their way in the senior team when the AFC Asian Women's Cup comes around. The AIFF has been working really hard on this team for over a year now and with this tournament (AFC Asian Women's Cup) also scheduled for 2022, it will certainly be an incentive for the youngsters to look up to after the World Cup," the head coach commented.

Ashalata said that organising the two major women’s tournaments will be a big boost for future generations, saying, "As a result of these two tournaments, not only will we see women's football get a lot of attention but there will also be upgradations in the infrastructure and facilities across the countries. As a result, it will greatly benefit the future generations of players in India."

Aditi stated that the two events could 'define the future of women's football’ in the country and stressed the importance of continuing the building momentum.

"Women's football in India has gathered good momentum right now because of our recent performances and results and there are a lot more people talking about women's football now more than ever. So, the U-17 World Cup next year and the AFC Women's Asian Cup in 2022 are massive events that can define the future of women's football in India. So, as players representing our nation, we need to really gear up and focus completely on ourselves, our fitness and our preparation for these events."

Simran Basnet: ‘No ample opportunities for girls in comparison with boys’