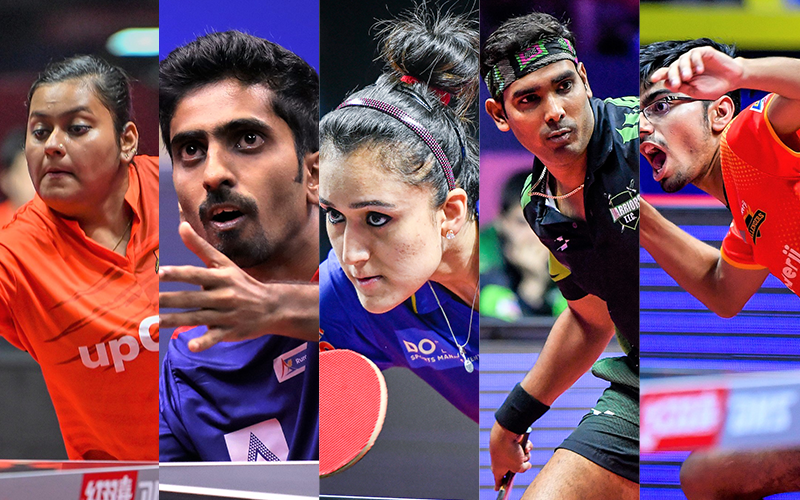 From big scalp to to dramatic comebacks and stunning moments of brilliance, this list has a little bit of everything.

Being dominated by countries like China and Japan, table tennis saw Indians struggling most of the time if not always against top-ranked international opponents. It isn't the case anymore though, since the inception of India's premier table tennis league Ultimate Table Tennis, where not just the country's elite players but also youngsters rubbed shoulders against the world's top paddlers and managed to beat them.

This was also followed by some consistent winning performances by Indians against higher-ranked players at the international stage.

On World Table Tennis Day, here are the top-5 sensational triumphs by Indian paddlers against some of world's biggest names during three seasons of Ultimate Table Tennis.

Reigning national champion Gnanasekaran Sathiyan was one of the big finds of the inaugural season of Ultimate Table Tennis in 2017. The Tamil Nadu paddler made headlines when he shocked World No. 8 Wong Chun Ting of Hong Kong 2-1 while representing Dabang Smashers T.T.C. Interestingly Sathiyan was ranked 110 in the world when he defeated Ting. With this victory, he showed his remarkable skill set and swift gameplay. Two years later the Indian faced off once again against the same opponent and this time it was at an international event —the 2019 ITTF Asian Cup. Sathiyan capitalised on the confidence gained from the victory in UTT and went on to register one of the biggest wins of his international career with the 12-10, 10-12, 11-5, 11-6, 11-8 scoreline against the World Cup bronze medallist. With some impressive performances he also achieved a career-best 24th rank — highest ever for an Indian.

Ranked outside 200 in the world, Sutirtha Mukherjee had a memorable outing at the last edition of Ultimate Table Tennis in 2019. Representing U Mumba, Sutirtha caught everyone's attention when she shocked World No. 9 Cheng I-Ching to lead her team into the semi-finals. The West Bengal paddler pulled off a stunning 2-1 win against the World Championship silver medalist star player from Chinese Taipei. The paddler later in January 2020 at the World Team Qualifiers played a crucial role and kept the Indian challenge alive with a stunning 3-2 win against World No. 19 Bernadette Szocs before the team went down 2-3 against Romania. Currently ranked in the top-100, Sutirtha has already sealed a spot for her maiden Olympics at the 2020 Tokyo Games.

Manav Thakkar is currently ranked No. 1 in the World U-21 rankings and he's also the first-ever Indian to achieve this feat. The youngster had shown a lot of promise with some breathtaking performances on many occasions during his appearances in the three seasons of UTT. One such instance was in the second season in 2018 when he locked horns against a rival from Sweden, who was 223 places higher than him in the rankings. 18-year-old Thakkar showed great display of skill and composure beyond his age to cause a major upset when he rattled World No. 18 Kristian Karlsson 2-1 to hand his side Empowerji Challengers a fine victory.

Indian TT's poster-girl Manika Batra put in impressive performances in the first season of Ultimate Table Tennis. Batra, while playing for Dabang Smashers T.T.C. in season 2, produced one of the memorable performances of the league when she upstaged World No. 18 Sofia Polcanova of Austria 2-1. Currently ranked 63, Batra has been among the country's most consistent paddlers on the international stage.

The record nine-time national champion Achanta Sharath Kamal is currently the country's most experienced paddler. Seasoned campaigner Sharath registered a remarkable victory in the second season of UTT when he outshone the World Championships silver medalist Mattias Falck. The veteran Indian knocked down Swedish World No. 20 2-1 while representing the Team Warriors. Earlier last year Sharath clinched his first ITTF title after a decade-long wait at Oman Open and he also shocked World No. 16 German paddler Patrick Franziska at the recent WTT Star Contender Doha before securing a place for his fourth Olympic Games.