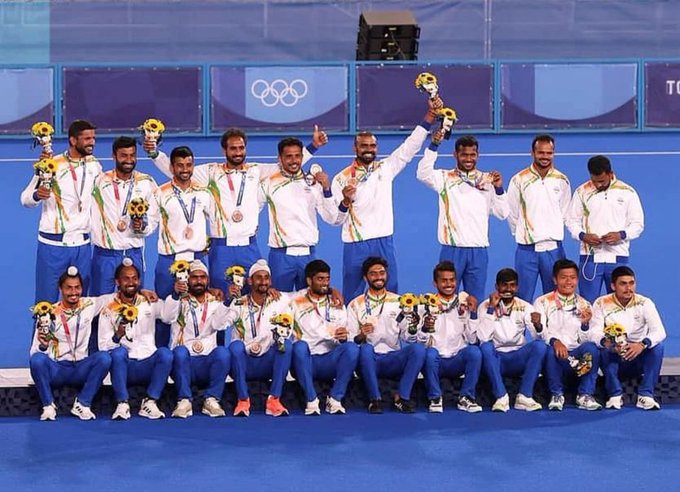 The year 2021 will be cherished forever in the history of Indian sports as it gave the Indian Men's Hockey team an opportunity to end the 41-year Olympic Medal drought. Defying the odds and overcoming various challenges thrown by the deadly COVID-19 virus, the Manpreet Singh-led side clinched the historic Bronze medal at the prestigious Tokyo Olympics in August 2021.

The second year of Pandemic i.e., 2021 started on a brighter note, with the Indian team returning to international hockey after a one-year hiatus. The side had a memorable outing against teams like Germany, Great Britain and Argentina in February and March 2021, respectively. They also won both of their FIH Pro League encounters against Argentina, which helped them gain momentum ahead of the quadrennial Games.

Having spent almost one-and-a-half-year in SAI, Bengaluru before Tokyo Olympics, the Indian Men's Team Captain Manpreet, while reflecting on the year, expressed, "It's true 2021 has brought a new dawn for Indian hockey. It's been a dream year. Of course, it was full of challenges, ups and downs, and I am really proud of the way we have overcome each obstacle to bring back the Olympic glory. It was hard work of not four, but five years. We spent one whole year at the camp, trying to adapt to the new norms of life, our whole lifestyle has changed, we started living the bio-bubble life. So, there were challenges off the field as well."

At the Olympics, team India finished second in the Pool stage, winning four out of five matches and defeated Great Britain 3-1 in Quarter-Final before losing 5-2 against Belgium in their historic Semi-Final. However, India staged a remarkable comeback and earned a 5-4 win over Germany to clinch the historic Bronze medal at Olympic Games.

"The team unity was one of the biggest reasons behind our Olympics success. You know the biggest positive of all this was that we as a team came very closer, and it really helped us during the Olympics. Faith among each other was something that made the team atmosphere very positive, and it motivated us to give our best on the field," said the 29-year-old.

He further added that this success wouldn't have been possible to achieve without the undying support from the Sports Authority of India, Ministry of Youth Affairs and Sports (MYAS) and the Odisha State Government, which has also extended its partnership with Hockey India for 10 more years.

"We are really grateful to the Sports Authority of India, Ministry of Youth Affairs and Sports (MYAS) and the Odisha State Government for their undying support and motivation as this success wouldn't have been possible without them, expressed Skipper Manpreet.

Throwback to the #Tokyo2020 Medal ceremony 👏🥉

The Indian team finished third at the recently concluded Men's Asian Champions Trophy 2021, having defeated arch-rivals Pakistan 4-3 in a thrilling third/fourth placing match. Moreover, as per the recent world rankings announced by the FIH, the Men's Hockey team will end the dream year on the third spot, their highest-ever FIH World ranking since its introduction in 2003.

The team now looks forward to capitalising on this historic year as they gear up for the busy season in 2022.

"We are really fortunate of all the support and love, which we have received after coming back from Tokyo. We have promised our fans that we will keep working hard to make them proud again. Our goal obviously is to change the colour of this medal, and we are also aware of what it will take to do it. We have started the new cycle with Asian Champions Trophy, now we have to keep improving from here. We have a challenging schedule ahead, and we are up for it," Manpreet signed off.