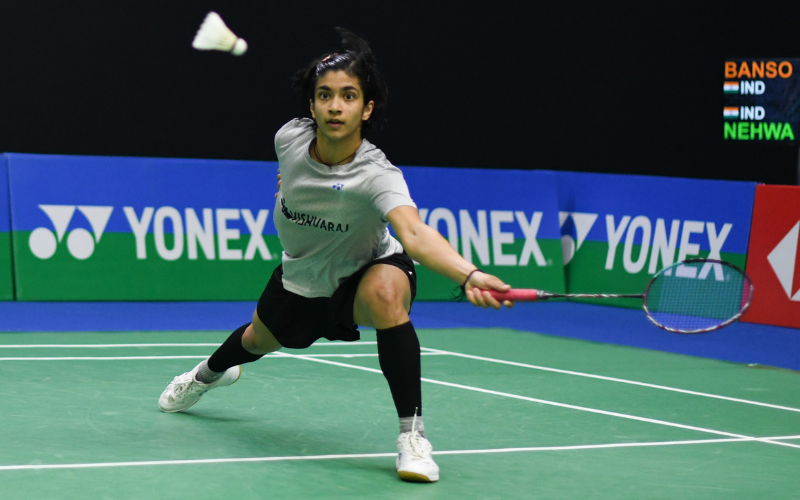 Malvika Bansod became only the second Indian to beat former World No. 1 Saina Nehwal since 2017 in any international tournament while Ashmita Chaliha continued her strong run by beating France's Yaelle Hoyaux to reach the quarter-finals of the Yonex-Sunrise India Open 2022, which is part of the HSBC BWF World Tour tournament series, at the KD Jadhav stadium on Thursday. Bansod defeated Nehwal 21-17, 21-9 in 34 minutes while Chaliha got the better of Hoyaux 21-17, 21-14. Also advancing to the Round of 8 were top seed PV Sindhu and Aakarshi Kashyap. Sindhu defeated Ira Sharma 21-10, 21-10 while Kashyap beat Keyura Mopati with an identical scoreline.Prior to today's match, Nehwal's only loss against an Indian opponent at the India Open was in the quarter final against PV Sindhu in 2017. On the domestic circuit, any Indian to beat her was in 2006 by Aparna Popat in Bangalore Nationals, fifteen years ago.And even though Nehwal hadn't been at her physical best and is still recovering from a serious knee-injury in this tournament, Bansod's task was far from easy as the experienced former champion was willing to dig in and fight for every point. Bansod started by playing more drops to counter Nehwal's ability to hit down the line smashes and that allowed her to open up an 11-6 lead in the opening game.Under pressure from Bansod, she then started pushing herself to lift better from the forehand corner and pushing her opponent to the back court. That allowed her to close the gap at 16-18 before two consecutive unforced errors on smashes allowed Bansod to pocket the opening game. The world No. 111, who lists reading anything from a pamphlet to dictionary when free as her hobby, also read Nehwal's game plan of pushing her to the backcourt rather well and kept on moving her opponent to all four corners and tested her overall fitness. Many a times, Nehwal was slow to react to Bansod's flat tosses and was never in the fight in the second game. "I was playing her for the first time and was not thinking of winning or losing. My game plan was to just keep the shuttle in play and keep moving her," said Bansod after the match. The 20-year-old, who had been following Nehwal's career since she first saw her posters during a state level tournament nine years ago, said she made it a point to not see her senior compatriot's face during the entire match as she was afraid of losing focus. Bansod, playing in her first Yonex-Sunrise India Open, will now face Kashyap in what will be a repeat of last month's All India senior ranking tournament final in Hyderabad. While Bansod registered the biggest victory of her career on Thursday, a calm and composed Chaliha proved quite strong for Hoyaux. The French woman was first to get off the blocks and took a 15-11 lead before the Indian turned the tables against the fellow left-hander. Chaliha won nine straight points to reach game point and converted the second one. The Guwahati girl was in total control in the second game as she raced to an easy win. She will now face Sindhu in the Round of 8 and though she knows she is going to be a rank-outsider against the former world champion, the 22-year-old wants to just go out and enjoy herself on the court.