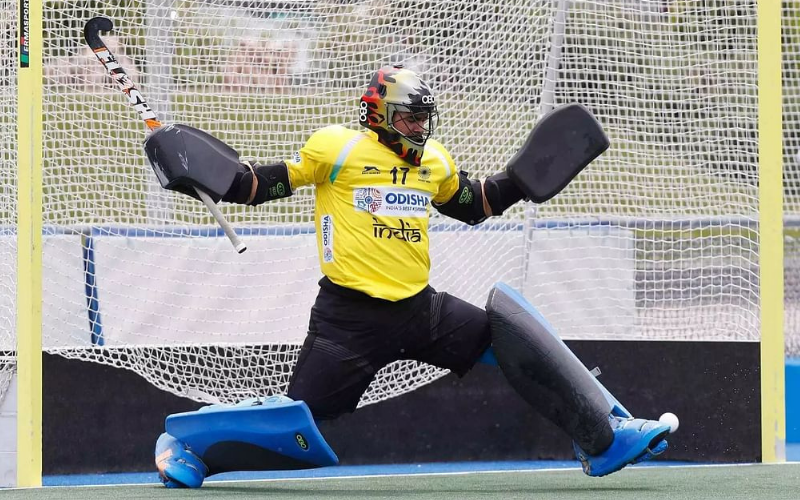 The young custodian says the team is applying finishing touches to their preparation before the FIH Odisha Hockey Men’s Junior World Cup later this month.

As we edge closer to the FIH Odisha Hockey Men’s Junior World Cup which is set to begin on 24 November in Bhubaneswar, the India Colts are looking to applying finishing the touches to their long and intense training camp as they set out to defend their World Cup crown on home territory. India Junior Men’s Hockey Team goalkeeper Pawan claims that the Indian Junior Men’s Core Group has been working extremely hard for the upcoming World Cup and the team is looking to work through the final stage of their preparation before the marquee competition.

“We have been working extremely hard in training camp here in SAI Bengaluru for the last five months as we prepare for the FIH Odisha Hockey Men’s Junior World Cup. Our focus for the entire period has been on this competition and we are really eager to do well this time. Our preparation has been going really well as we are particularly working on developing our fitness and stick work. We have been working well together as a group, and in these final few weeks our focus is on applying the finishing touches to our long and intense preparation,” said the young goalkeeper from Umra, Haryana.

As hosts and defending Champions India prepare to face off against Canada, France and Poland in Pool B of the competition, the India Colts have taken the opportunity to go toe-to-toe with the Senior India Men’s Hockey Team in the National Camp. Pawan states that this has been an invaluable opportunity for him to learn and gain confidence ahead of the FIH Odisha Hockey Men’s Junior World Cup.

He said, “The senior team has just returned from the Tokyo Olympics with a medal, so we get to learn a lot when the senior players share their experience with us. Moreover, when we train with them or compete against them in training, it is an amazing opportunity for us to learn from players who are playing at such a high level. It also gives us a lot of confidence and motivation to do well, as we want to earn a medal in the World Cup just like the Senior Men’s Hockey Team did in the Olympics. It is wonderful to work with Chief Coach Graham Reid as well, by working on some very innovative training drills.”

Pawan is a student of the National Hockey Academy in Delhi. He speaks about his resolve to cement his place in the academy at a young age when he had to deal with his fair share of challenges in his dream to pursue hockey professionally.

“Since I was playing as a goalkeeper even at a young age, it was difficult to manage to get a full goalkeeper’s playing kit as it was expensive and my family could not always afford to buy a full kit. My family made a lot of sacrifices and I made adjustments as well, but this used to be one of the biggest challenges growing up. My focus in those years was to just cement my place in a good hockey academy so I could continue to train and get better as a hockey player without facing such obstacles in the way. When I look back now, it feels like a blessing to reach this position and I hope that I will continue to develop even further as a player,” Pawan signed off.