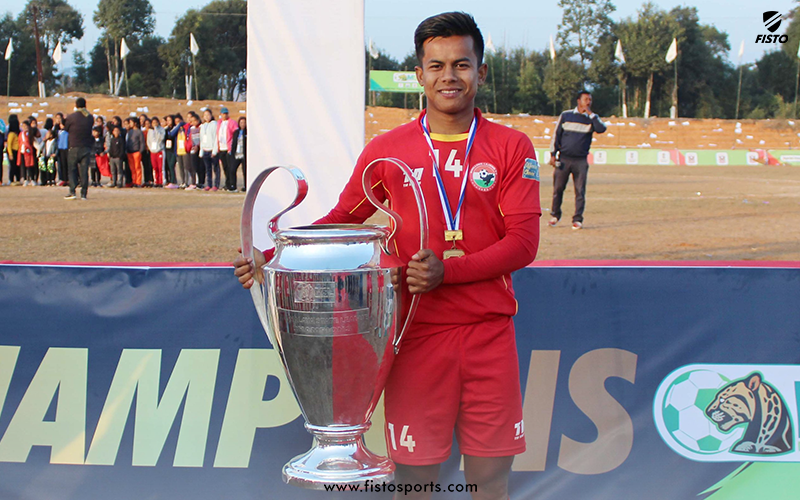 Shillong has a reputation for producing young football talents and Phrangki Buam is the latest off the conveyor belt.

Phrangki Buam has always been the frontrunner when called upon. After all, there's nothing more eye-catching than a No.10 running the show and knows where the back of the net is.

The last three years has been huge for Buam. Currently plying his trade in Shillong Premier League, Meghalaya State League, and I-League second division, the 19-year-old has been an outstanding and shows no signs of slowing down.

In 2018-19 season, Shillong Lajong embroiled in a relegation battle in I-League, but that didn’t stop him from shining and finishing the club’s top-scorer with six goals.

Buam models his game on Juventus star striker Cristiano Ronaldo and prides himself on scoring goals. And Buam is currently pursuing education, sociology and Khasi language in his Bachelor of Arts course at Shillong College.

The Shillong boy has shown enough to suggest he could be an elite member of his generation by the time he reaches his peak. You can expect to see him feature at top club in the coming years and he is certainly one to keep on your radar.

He talks about his footballing journey, goalscoring form, dreams, and goals ahead.

Despite not playing in the top division league, you have been firing all cylinders in the recent times, top-scorer for the club, SPL title plus gold boot winner, top-scorer for the Meghalaya State League. What is the secret behind your consistent goal-scoring form? And, how much hungrier are you now to line up in terms of improvements and what have you tried to personally focus on?

The secret behind my consistent goal-scoring form is that I take good care of myself, do extra training, sleep early at night to recover, eat healthy food, and most of the times I eat at the same time every day. Playing a lot is good experience, I'm not tired with it. We need to play more to get experience. Now most of the times, I try to improve my heading and my speed during this time.

Who was your role model growing up and how did they influence the way you play on the pitch?

It is my family who has always helped me, guided me and taught me how to be disciplined and be humble. My uncle told me that only football will help me aid my family because it is very hard to get a job at this time, but I must work very hard to be a success. When I am on the pitch, they always advise me to give my 100 percent.

Who have been some of your strongest backbone or pillar for your sports career?

My family, friends, coaches, teammates, advisors World1 Sports, and the fans have always been a strong backbone for me.

I will request them to watch me play and then support me and my team. I think viewers are best placed to describe my style of play.

You’ve had a lot of memorable matches but list the top 3 most gratifying matches you have ever played?

Read: A Dream Dashed, and Another Delivered: The Incredible Journey of Indiaﾒs U-15 Coach Kanan Priolkar

What’s the hardest/fastest workout you can remember doing? In regards to a workout which afterwards you’re thinking, “damn I’ve never been this fast and good.”

It is 1 versus 1 attacking and defending.

If you could go pro in sports other than football, what would it be?

Badminton player, but I love playing cricket as well.

What’s the single greatest lesson football has taught you about life?

Football has taught me the most important lesson I've ever learnt If you never give up, you won't ever fail. Work hard, work hard and work hard, never give up!

Playing for an ISL club and representing the Indian Football Team. What’s type of genre music you listen the most: Electronic music

Who comes to your meets to cheer you on: My friends

A celebrity you dream of clicking a dualfie with? Cristiano Ronaldo

If you didn't make it in football, what career would you be interested in now? Badminton player

Kavin Sridhar: 'It's all the little things around swimming I tend to focus on because if I think about all those things, the big things will just com