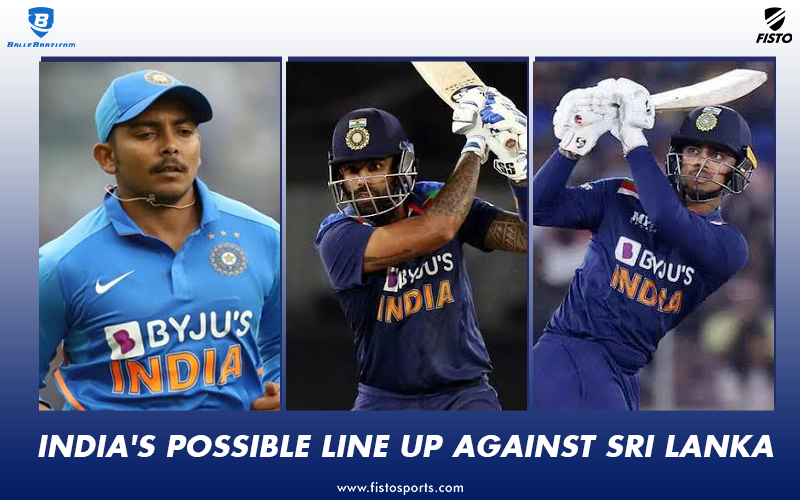 This series is pretty crucial as it gives a final opportunity to think about the combination Team India will be using in the T20 World Cup to be held in Dubai in October.

While most of the senior pros are in England for the test series it will be interesting to see what combination Team India will go with in the first ODI under the leadership of Shikhar Dhawan.

A 20-member squad has been announced which gives enough options to Shikhar Dhawan and Rahul Dravid to try their best combination.

Looking at all the permutations and combinations, this could be the possible XI in the first ODI against Sri Lanka: -

Shikhar Dhawan will certainly be the first opener while it’s almost certain that Prithvi Shaw will bat alongside him.

Prithvi Shaw’s supreme form in IPL 2021, Vijay Hazare Tournament and Syed Mushtaq Ali Trophy will give him a direct berth.

The other two openers Devdutt Padikkal and Ruturaj Gaikwad are also looking good but will have to wait for their chances.

With his recent form and amount of runs he has piled in the last 3-4 years, Suryakumar Yadav will straight away walk into the squad.

He made his debut against England in the second T20 and got his first 50 in the fourth game.

Ishan Kishan too made his debut in the England series with a fiery 50 that shocked everyone. He never looked like he’s just playing his first international game.

He also had a better IPL 2021 and thus might get a preference over Sanju Samson. However, Samson’s chances also don’t look bleak.

On the other hand, Manish Pandey’s inclusion in this squad is quite interesting.

He hasn’t been in the best of form and his IPL performance was not good either.

Experts believe that he has been given a last chance to prove himself as there aren’t much experienced batters in this squad.

This might turn out to be his final chance and thus will get enough opportunity to showcase his potential.

What a start to your ODI career Ishu baby 🔥 That’s one way to celebrate your birthday @ishankishan51 🎂 Special mention to @surya_14kumar - class as usual👏 pic.twitter.com/fy9zKPSVKj

Pandya Brothers will definitely get their chance considering their all-round ability and the impact they create in the limited-overs format.

Hardik has been a consistent number 6 batter for India for quite some time now while Krunal has been good both with bat and ball with the limited opportunities that he has got.

The most important point of discussion is Hardik’s bowling and whether he can give enough overs to a create better balance.

Team India has three options to try in the pace department along with Bhuvneshwar Kumar.

Deepak Chahar’s consistency in the last few years makes his case very strong and thus Saini and Sakaria might have to wait for their opportunity.

All ready for the first ODI against 🇱🇰 starting from Sunday 💪

The selection of spinners will definitely be a headache for the team management.

Yuzvendra Chahal looks a pretty obvious choice to start with and the team will be tempted to play the KulCha combination again after a long gap.

The problem with Kuldeep Yadav’s selection is the lack of games he gets nowadays for Kolkata Knight Riders. While his counterpart, Varun Chakravarthy is a regular wicket-taker for the last two seasons.

Rahul Chahar is another good prospect and will keep team management on their toes for the selection.

Considering the ability of all these guys, it looks like they all will get games and the team needs to divide games effectively among them to give them a chance to prove themselves for the T20 World Cup.

So, that’s the final XI for the first game against Sri Lanka

You don't need to be a natural to do well in cricket, says Bhuvneshwar Kumar