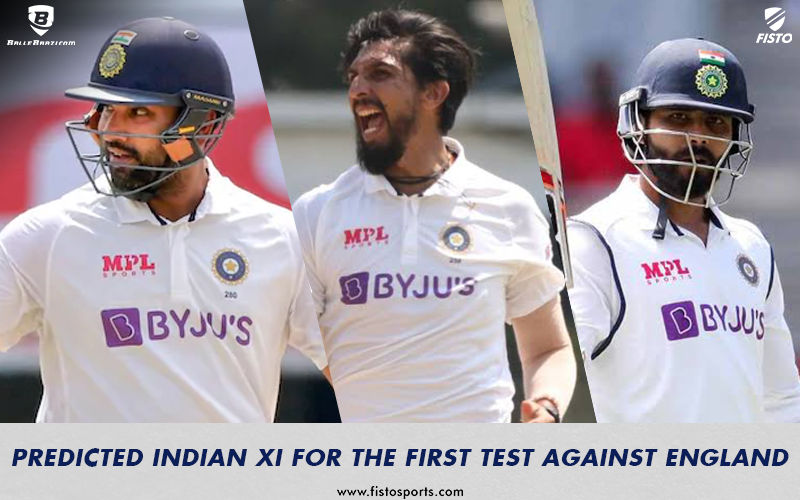 Test Cricket is back and it doesn’t start easy for Kohli & Co. Who will make the starting XI and extended bench for the India first test clash with England?

Team India is all set to face their toughest opponent England from 4th August for a five-match test series.

Team India is optimistic about getting a series win after the kind of cricket they played in the first World Test Championship.

Even though India lost the WTC final here in English conditions, but they might not look to make many changes in the first game to the squad which played the final.

Rohit Sharma has done enough to be recognised as a permanent opener now. Even though he hasn’t got big scores as he gets in shorter formats but has played the new ball really well in overseas conditions.

Shubman Gill’s injury has resulted in another opportunity for Mayank Agarwal to prove himself who was dropped after the second test in Australia.

Team India’s three most crucial batsmen bat together at 3,4 and 5. Their performance directly reflects to the overall team total.

While there are some questions on Pujara’s strike rate which definitely can be improved but it seems really unlikely to drop him.

Virat Kohli will try to get that hundred which he hasn’t scored for a long time now while Rahane will also be looking to give some solid scores right from the first test.

There are some concerns about Rahane’s injury and if he’s not fully fit then KL Rahul might get a chance in the middle order.

Ahead of the England Tests, @RishabhPant17 reflects on his cricket journey & more 😎 - by @RajalArora

Rishabh Pant is the most improved batsman in the last 6 months.

His heroics in Australia led to a historic victory, and he has kept improving since then.

There’s no doubt on his place in the side until and unless he gets injured which can allow Saha to get some games.

Even though English conditions suit the pacers a lot but team India still don’t have a genuine pace-bowling all-rounder.

Both Ash and Jaddu are in supreme form and hence you cannot keep either of them on the bench.

As the series goes on, Team India might like to try Shardul Thakur as an all-rounder or may find a surface where they need six genuine batsmen but until then they’ll stick to Ashwin and Jadeja for sure.

Team India will certainly go with the combination of Shami, Ishant and Bumrah in the first test.

This is their tried and tested combination for quite some time now and have yielded great results.

Even though Jasprit Bumrah had a terrible WTC final and had to face a lot of criticism for going wicketless in both the innings, the team will still back him to do well against the English side.

As it’s a five-match series with a lesser gap between games, it’ll be really difficult to keep the same pace attack in all the games.

Thus, Mohammad Siraj, Umesh Yadav and even Shardul Thakur will get a chance to proves themselves in these overcast conditions.

Team India lost the World Test Championship just a month back here in the same conditions still it’s really unlikely for them to make wholesome changes on the basis of just one game.

Mayank Agarwal is a forced change as Shubman Gill has injured himself and the rest of the team should remain the same at least for the first game.

Team will also be keen to look at KL Rahul and Mohammad Siraj on the basis of their recent performance.

Complete XI for the first test