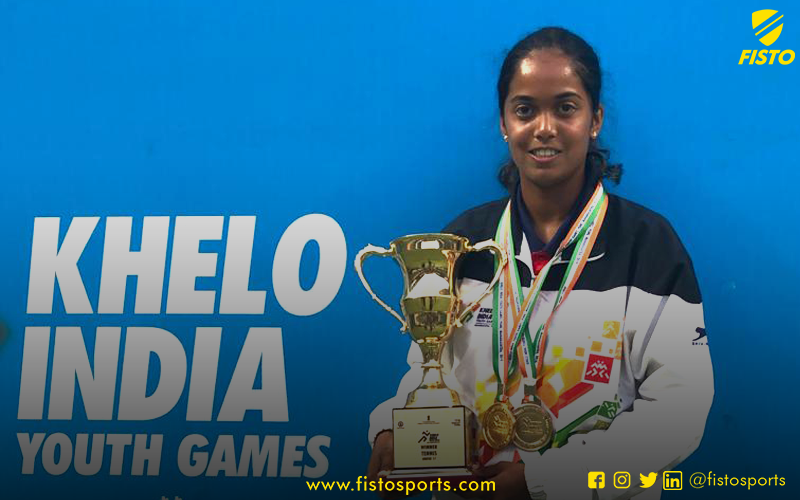 Hailing from Mumbai, Prerna Vichare is one of a handful of women’s tennis players from India who are looking to cement themselves at the highest levels.

Prerna Vichare, like so many other young tennis players, began playing the sport quite young, but her love and passion for sport from an early age has pushed her to ply trade professionally.

Declaring herself an ardent fan of Serena Williams, the burly tennis talent has worked her way back to the top and is now only getting better and better.

The teen player has many achievements in her fold. She won seven AITA titles in U-16 and winners of the Tennis Premier League 1.0 and runners-up in the second season.

However, the 2018-19 was a breakthrough year for Prerna and saw her announce herself to the world as a player to keep an eye on. She had represented India in Juniors Fed Cup at Malaysia in 2018 and won her all singles matches. In 2019, she won golden double at the 2019 Khelo India Youth Games, capturing singles and doubles gold in the girls Under-17 category.

The NM college of commerce and economics student puts equal focus on the study and games. She carries her academics books along with where she goes to play. She does her homework when she returns in the hotel after the match.

With the world basically being on lockdown, it may not be her time currently, but if she continues to keep her feet on the ground and learn from those around her who are more experienced, Prerna will certainly have her time in the sun.

At what age did you start in tennis?

I used to go watch my brother play from a very young age but I started playing when I was around 6-7 years old.

When did you say: yes, I will dedicate myself to tennis?

I think when I was around 12-years-old my parents and coaches felt I was good and since I loved the sport, we decided to turn tennis from just a sport that I was playing for enjoyment to a sport I played competitively.

Who is your biggest supporter when it comes to tennis and how has your family/college played a role in your tennis career?

My family definitely have to be my main support system, but during the latter part of my school years, my teachers also helped me pursue the sport and motivated me to do better. My school as well has college has been very supportive of my tennis, in the context, that they gave me leave to go for tournaments, and let me take retests when I wasn’t able to attend the exams due to travelling.

Who were your Tennis idols when you first became interested in the sport? What was is about their character or achievements that you admired?

My tennis idols have always been and still are Rafael Nadal and Serena Williams. Rafa’s on court attitude and the never give up spirit are the main things that I admired. Serena, I mean she’s Serena, she’s just an amazing player all together, the things she has achieved are just unbelievable. I grew up watching her play and it motivated me a lot.

I train at Practennis Academy in Mumbai, Maharashtra. I coach under Rama Rao sir as well as Alon Moses.

Would you like to have compete along with Serena Williams and what would have been your tactics to beat her?

I mean it would be unreal to compete with Serena Williams, it would be a dream come true. Haha to beat her I think my tactics would be probably to make her run and move a lot around the court, cause my game is more variation based, so I would use a few variations to keep her on her toes, cause I most definitely would not be able to beat her strength wise, so I would try to make her move around more and try to get her out of her comfort zone.

Any tough moments (setbacks, rejections, injuries, basically anything difficult that you have had to overcome)?

I have had a lot of injuries since I was around 13 but none of them have been very serious thankfully, I would have to rest then for 2-3 months but not more than that, touch wood. But I think one setback was I think in 2017, I had gotten dengue and had to be admitted in the hospital, and it was worse cause I had to miss my nationals because of that, which affected my ranking quite a lot, cause nationals is worth a lot of points

What are the challenges of playing Tennis in India? Why isn’t it a popular sport among women in your state?

The challenges of playing tennis in India is that first of all there aren’t a lot of international tournaments held in India and plus Indian tennis players at least juniors do not get a lot of financial support, so going to play internationally is kind of a problem. I don’t think it isn’t a popular sport among women per say, but I think it’s not that popular of a sport because again, tennis is a very expensive sport, the equipments, the training all comes up to a hefty price, so I don’t think a lot of people can afford to send their sons or daughters for tennis, and also tennis as yet is not as hyped in India as sports like cricket or football are.

What is your pregame ritual on game day?

I don’t have a lot of pregame rituals, but I warm up for a while and listen to my favourite music which pumps me up and gets me ready for my match.

Are you balance the rigors of tennis and education at the same time?

For me personally, education is very important, so from a young age my family has got me in the habit of balancing both the things, even if I had the option of skipping exams, I would always try to take a retest once I’m done with my tournament. And usually I carry a few books while travelling so when I’m in the hotel, I study for a while when I’m done with that particular day’s schedule.

Are there any aspects of your game that you would consider underrated?

I wouldn’t really consider anything underrated, but I have been trying to improve on a few aspects of my game.

Rivalry is cool as it motivates you to take your game to next level. Who is your biggest rival in tennis and what makes that rivalry special?

Since I’ve been in this circuit for quite some time I have a few girls I have rivalries with cause all of us have been playing each other for a long time, but if I had to name one, I would probably say Sharannya Gaware from Pune, cause I have been playing her from U-12 days when we used to play tournaments only in Maharashtra and we’ve grown up together in the circuit, the thing that makes this rivalry special is that we’re very close friends, whenever anyone wins or loses there is no attitude or bad vibes after the match, we’re always friends and hang out even after the match, and we’ve been this way for a long time now.

At this point in your tennis life what has been the most memorable moment, or moments?

I’m sure there are times during your training that you aren’t achieving the results that you want. What do you do to lift your spirits during such times?

Yeah, there are a lot of times that I have those moments, but I always manage to pick myself up after a huge fall and try to do better and sometimes I just think about the reason I started playing and that was to enjoy the sport, so you do exactly that.

What’s your top three tennis shots to do or that you just generally like?

My top three tennis shots are my dropshots, volleys and serves. But the dropshots I can’t use continuously so my next favourite is the forehand crosscourt.

What sacrifices did you find the hardest in order to pursue your tennis career, and would you say that tennis has changed you as a person?

The only real sacrifices I had to make for tennis is basically not live like an usual teenager, that is go to meet friends all the time or go for parties, things like that, which I would not be able to attend if I was travelling or training.

Finally, you’re still at a very early stage of your career. What kinds of things are you doing to make yourself the best player you can be?

I’m trying to improve every aspect of my game and especially trying to improve my fitness level be it agility, footwork or endurance. And I’m taking advice from my coaches and parents and also talk to a few professional players a lot, like Purav Raja and Ramkumar Ramanathan who have been motivating me to give my best in everything I do.

Most over used word? lit

Which celebrity would you want to be for a day? Camila cabello