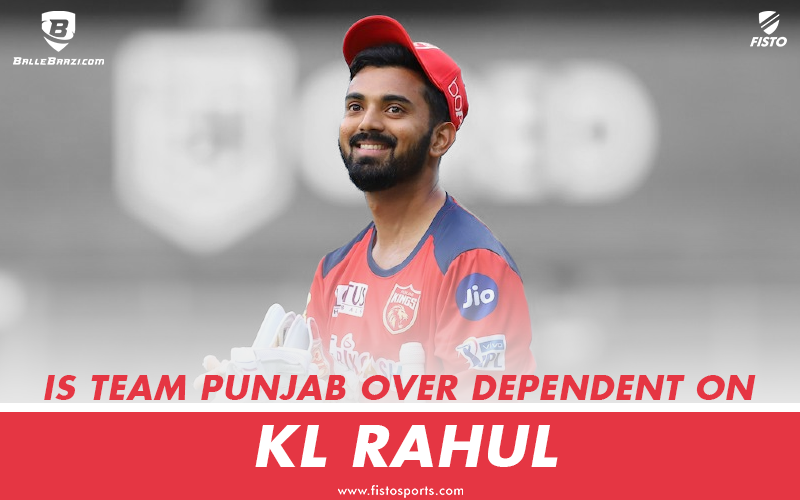 6th in the IPL points table, Punjab Kings, who changed their name from Kings XI Punjab this season, do not look all too different as compared to previous seasons. There is, however, a pattern they have followed for the last three seasons, including the current season, and that is the over-dependence on their current team captain, KL Rahul.

There is no doubt regarding the fact that KL Rahul is probably one of the best Indian wicket-keeper batsmen of the current lot, and his performances are enough of that. IPL 2018 saw KL Rahul become one of the revelations in the Punjab team as he scored 659 runs, including six half-centuries and a few scores in the 90’s. Rahul finished as the 3rd highest run-scorer that season, only behind the likes of Rishabh Pant and Kane Williamson.

The wicket keeper-batsmen followed this up by finishing as the 2nd highest run-scorer in the 2019 IPL, as he scored 593 runs, including his maiden IPL ton. Rahul, however, hit his peak last season in IPL 2020, which was conducted in the UAE, as he finished as the top run-scorer in the tournament with a mammoth 670 runs. The highlight for KL Rahul in that tournament was his incredible 132* against former team Royal Challengers Bangalore, which became the highest individual score by an Indian batsman in the IPL.

Rahul has continued his good form into this season of the IPL (2021) as well, with only Shikhar Dhawan scoring more runs than him before the IPL was called off halfway through the season.

KL Rahul’s performances in the 2018 and 2019 seasons led to him becoming club captain in the 2020 season, after former captain Ravichandran Ashwin left Punjab Kings for the Delhi Capitals. While this did not bother his performances between the wickets, one could see the toll Rahul was taking due to the pressure of being a captain. Rahul had the mentality but lacked the voice in the dressing room, which in turn led to Punjab having a poor season last year, despite KL Rahul performing exceedingly well.

While in previous seasons, Rahul was supported formidably by Chris Gayle, the latter has failed to perform in the last two seasons, and because of that, one can see the over-dependence on KL Rahul this season. Out of the eight games Punjab have played this season, they have won three of them, with KL Rahul scoring the most runs for Punjab in every one of those games.

In Punjab’s opening game of the season against Rajasthan Royals, Rahul scored a brilliant 91, as Punjab scored 221/6 in 20 overs. Punjab went on to win the game by 4 runs, and that highlighted the importance of KL Rahul’s knock. However, that was followed by poor performances against the likes of Chennai Super Kings, Delhi Capitals, and Sunrisers Hyderabad. One thing that was common in two out of the three games (Chennai & Hyderabad) mentioned above was KL Rahul getting out on a single-digit score.

Punjab’s captain has come through for them on most occasions this season, but it seems like he is the only one interested in doing so. While the acquisition of Shahrukh Khan was a good one, playing him down at number 6 or 7 has not helped Punjab’s case, as Chris Gayle (178 runs in 8 innings) and Nicholas Pooran (28 runs in 7 innings) have been misfiring this season as well. While Mayank Agarwal has shown signs of promise this season, he is very unpredictable. Deepak Hooda is a terrific all-rounder, but even he cannot single-handedly carry this Punjab team.

However, every time KL Rahul has failed to open gloriously this season, Punjab have capitulated big time- like a house of cards.

Punjab Kings record this season when KL Rahul has and has not performed.

This depicts the over-dependence of the Punjab team on KL Rahul, and their serious need for some stability in the middle order. Consistency and stability in the middle order are the two key elements of any IPL winning team, something record 5-time IPL champions Mumbai Indians have shown over the years. While Punjab’s bowlers deserve equal slack, it is their batting lineup, barring KL Rahul, that have been under-performing severely, and this portrays a bad image of club captain, KL Rahul.

It is high time Punjab Kings pull up their socks and deliver a set of stunning knocks regardless of KL Rahul’s performances. They have a perfect blend of experience and youth in their ranks, and whenever the IPL does resume, Punjab’s batting lineup will need to show their quality and their desire to finish in the knockout stages of the IPL, something the franchise last achieved in 2014.