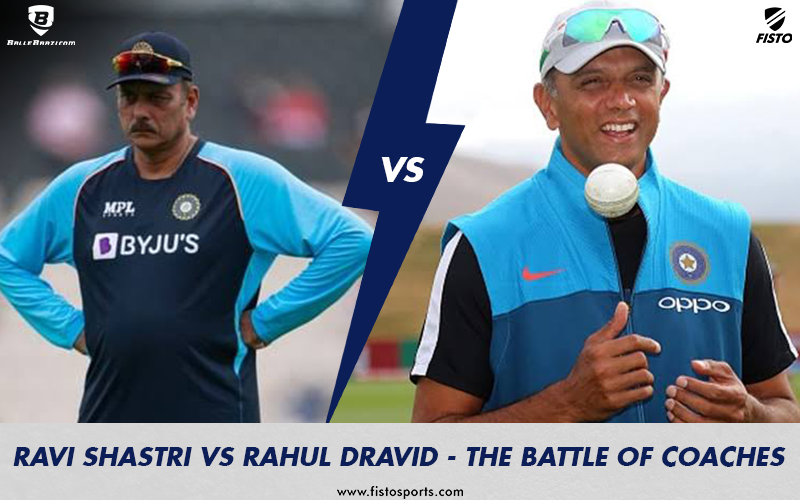 Cricket pundits believe while aggressive cricket can help you win bilateral series, it can backfire you in pressure games. The Indian Team needs a cool and calm head in the leadership group to handle such situations and Dravid is really good at doing that.

Indian Cricket has always been full of debates. The huge number of followers it has, makes it really difficult to support a single idea or selection.

So, what’s the latest topic of debate in Indian Cricket?

It is Rahul Dravid vs Ravi Shastri.

The Sri Lanka series is the first series for Rahul Dravid as head coach of the senior side. He is the head coach of India A and India Under-19 teams for quite some time now.

The kind of revolution he has brought in those teams had already made it a point of discussion that he should be appointed as the head coach of the senior national side.

Now, as he has actually coached them for a series and Ravi Shastri’s term is about to end, fans and analysts are quite keen to see Dravid as the head coach permanently.

Rahul Dravid, one of the calmest player India has ever produced has done a lot already to be a big contender for this spot.

He is the wall of Indian Cricket, one of the most successful batsmen ever and quite a successful captain as well.

As a player he has achieved a lot for the country and clearly beats Ravi Shastri in terms of records. But coaching is altogether a different job.

Let’s have a look at the comparison between Rahul Dravid & Ravi Shastri as coaches:

While Shastri is very aggressive and agitated, Dravid is really calm and does his job quietly.

We all know how energetic Ravi’s voice is as we have grown up listening to his commentary.

He is known to motivate people through a lot of pep talk.

On the other hand, Dravid is really calm and composed and does his job without getting noticed much.

He doesn’t talk a lot and let players play their natural game and doesn’t over burden them with his ideas until really needed.

Ravi Shastri was appointed as the coach of Indian Team for his fourth term in August 2019 and his contract will end right after the T20 World Cup.

Indian Team has done a great job under him in the Test Format beating Australia twice in their backyard and topped the points table in World Test Championship.

A victory percentage of 60.87 speaks volumes about the victorious attitude of this team.

They have done a fair job in limited overs format as well.

But the thing that clearly goes against him is the consistent losses in pressure games.

While India lost the semifinals both in 2015 and 2019, they have lost the opportunity to grab the inaugural World Test Championship as well.

Cricket Pundits believe while aggressive cricket can help you win bilateral series, it can backfire you in pressure games.

Team needs a cool and calm head in the leadership group to handle such situations and Dravid is really good at doing that.

So what makes Dravid’s case stronger?

DO NOT MISS THIS!

1. His record with Junior Teams

India Under-19 and India A Team have almost become invincible.

He helped them lift the 2018 Under-19 World Cup under Prithvi Shaw and were the runner ups in 2020 under Priyam Garg.

Wherever these teams have travelled, they have had a huge impact.

2. His contribution to Bench Strength

The discipline, love and care for opponent under Rahul Dravid. pic.twitter.com/U9I8GHpP4Y

While Indian Team was struggling with injuries in Australia players like Shubman Gill, Mohammad Siraj and Washington Sundar gave heroic performance in their debut series allowing India to get a historic win down under.

Players like Ishan Kishan, Rahul Chahar and Prasiddh Krishna have also grabbed their opportunities with both hands.

All these players have played a lot of their junior cricket under Rahul Dravid, and he’s groomed them so well that they have started performing right from the word go.

Even though Shastri has earned huge success, considering, India’s past it seems really difficult for him to get one more term as the head coach.

T20 World Cup will also be a deciding factor. While reaching the semi-final stage won’t be an issue but one more knockout defeat and things can get really bad for the leadership group.

Rahul Dravid’s Sri Lankan Tour a debut for the ages