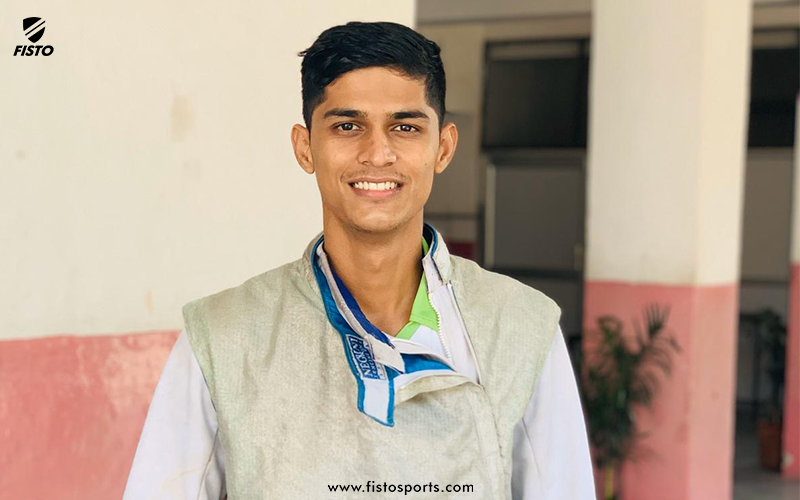 Though fencing has been an obscure and abstruse sport in India, Ravi Sharma has seemingly made a career out of it.

Thrust into the national fencing limelight due to a superb performance in 2016 All India University Championships, Ravi Sharma has certainly caught the eye.

Following in the footsteps of his older sister, Ravi Sharma started fencing aged seven. Honed by Ms Charanjeet Kaur, he rapidly progressed through the ranks.

A foil specialist with a penchant for the spectacular, the 23-year-old achieved notoriety at the All India University Championships, winning 2 gold, 4 silver and 7 bronze. The Indian Navy fencer combines accuracy, swiftness and control required to be a better foil fencer.

His journey so far has been exemplary; he went from a talent to a man to a marauder and to an Indian navy fencer. No matter how the future unfolds, Ravi Sharma keeps striving to the best version of himself and to be the consummate professional.

Can you talk about how you came to fencing, because it’s a pretty unique sport?

Following my elder sister's footsteps, I joined fencing in 2004 when our coach Ms Charanjeet Kaur had just introduced the game in the school. I joined without even knowing what fencing was and it took me almost 2 years to completely know fencing as a professional sport.

Any biggest accomplishment from fencing so far that you would call out?

Becoming a part of the Indian Team in Summer Universiade Taipei, 2017 and joining the Indian Navy fencing team contingent are my biggest accomplishments so far.

Since I started playing fencing professionally, my teammates and my coach Ms Charanjeet Kaur had inspired me a lot to do better and to be better all the time. Every training session is a challenge and an open opportunity to be better than before and before starting my session I keep this in mind.

I used to train for 4-6 hours a day, other than that I spent time on YouTube watching videos on daily basis and thinking about fencing all the time. As I was contributing in all to fencing, this attitude made me more passionate about grinding and winning. The same year, I lost Asian Championship qualifying medal bout in Senior Nationals. It took me months to accept that defeat. But later, this incident made me realise that overthinking was what hindered my progression in the competitions. I have come to realise with time that when you are a professional sportsperson, along with training, becoming practical in thoughts and acting accordingly becomes an essential part of your journey. That's how I am able to balance sports and personal life.

The main part i.e. competing in competitions and playing long bouts without having technical or equipment problem.

Among the three which is your favourite – foil, épée, and sabre?

I play foil and it is my favourite event among the three. Foil is the most technical event in fencing having a reduced target area i.e. torso and touches can be made only from the tip of the sword. It requires a fencer to have good accuracy, swiftness and control to be a better foil fencer.

Owning a fencing tool or equipment seems to be strange to people around having no clue about fencing but for us, we carry our pride, our love. It needs a long kit bag to carry all the pieces of equipment. It is challenging to travel on public transport with huge bags with you.

Walk us through a typical fencing practice for you.

It starts early in the morning where I do general fitness. Performing general and specific exercises and foot drills to improve fencing footwork, winding up with either yoga or stretching. Technical training starts afternoon which lasts for 3-4 hours. It starts with warming up followed by general and specific footwork and targeting exercises. Then starts the technical part where lessons, partner work and bouts are carried out according to days divided. Our coach looks over us as we perform actions during partner work and bouts to make corrections if required. I call it a day only after getting fully wet in sweat otherwise I continue training. If I had a good training session it's a good day for me.

What about it keeps you going and what advice can you provide to beginner fencers to stay motivated and have fun throughout their career?

Fencing is my passion and my profession. The obsession of becoming the best version of myself, making more appearances in different arenas and striving harder every day to get a place on the podium keeps me going. To beginners in fencing, I will advise to set a goal, be consistent and believe in the process, surely success will follow. When you join the training you should know your reasons otherwise you are wasting your time.

The memory is from senior national championship 2019 when our team was losing one-sided and I was captain and final player of my team. In team events, the first team to score 45, wins. I scored more than 25 touches out of 45 from last year's runner ups team to win our very first senior medal. It was the most memorable match for me and my team as well.

It is not about winning gold but representing oneself in a bigger platform. Without a doubt, I would prefer a bronze medal at the Olympics. Though I am nowhere near the Olympics but knowing the fact and doing nothing about it will never take me anywhere. I have a dream which is way bigger than I can put in words for which I am working on.

What's the most random/funny thing you've ever done in fencing during training?

When the coach is off the view, I often play foil with epee and sabre players while they play their own event. It sounds weird but it helps in improving reflexes.

Best or worst thing about being a fencer?

The best thing about fencing is that you can have training in any mood, whether you are calm or frustrated you can use it for your advantage. I don't think there is anything bad being a fencer other than having your favourite blade broken during training.

My medals are all kept?

My medals are hanging on my room's wall with the trophies standing proudly on the base waiting for more medals to join them.

Currently, I am working on mental and physical health and waiting for things to get normal. In future, I just want to see myself standing on a bigger podium where all my hustle and perseverance ends.

The tip of the fencing weapon is the second fastest moving object in sport; the first is the marksman's bullet ...