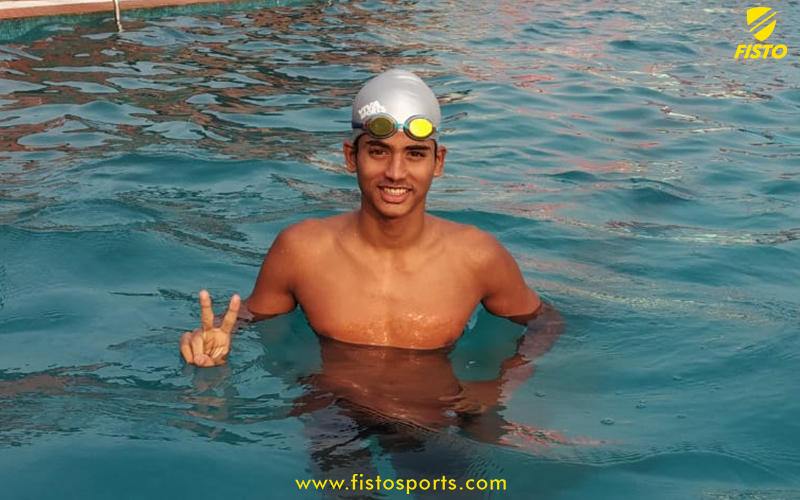 Rudraksh Sahu: “I'm learning from my mistakes. That's what keeps me going.”

An 18-year-old is on the prowl in the form of Rudraksh Sahu, the butterflying ace who has also proven himself as one of the best young talents in the 200m IM.

Rudraksh Sahu might easily seem to be natural at swimming, but he's done his fair share of the hard yards into making himself the champion he is.

Rudraksh started off swimming classes at the age of 8 though he had been exposed to water as young as 5 when he enjoyed playing in the water. He then took up the sport quite seriously and harboured an unwavering desire to compete in the highest level and hasn’t looked back since.

He was grateful for the platform provided through the Khelo India Youth Games and stressed on the importance of the financial incentives provided.

The REVA University, Bangalore student has been a state champion for nine consecutive years since 2011 and also won many CBSE national medals as well.

Rudraksh was not much of a planner and took one Meet and one race at a time, looking to do his best at each Meet and move on to the next higher level.

Given the confidence, he has in his abilities and his performances so far, the Chhattisgarh native seems to be ready to take the next step in the coming years, so keep an eye on him.

It’s been nearly 10 years since I started swimming professionally. I have come a long way and I have always developed the concept of achieving – one goal at a time – which has become part of my DNA now. And keeping a positive attitude towards every situation. It makes me so proud to see what I have become over the years.

My father inspires me the most. How he started his career in his crucial times and still made it to the National Podium. He taught me to go hard for whatever I want and never give up. Spending his weekends taking me to competitions which for him was probably a chore but for me was where my passion for swimming sparked from – there was nothing more exciting than coming home with a medal or two!

He has always been the champion in my eyes that comes in to save the day.

I have done a single-finger-hand-stand inside pool inspired by Bagghi movie, which I think is one of the craziest things I have ever done in a pool.

Once at the National School Games, I was standing in the line-up just before the race and I don't know why/what made me checking almost seven times my cap. So, when I pulled it below, cap torn off. I was so shocked and thinking what now as I was standing in front of the lane and at the same time, the starter whistled to come upon the block. I stopped him immediately and told him about it and my parents were seeing me, they came close to the gallery and gave me a new one. What I learn from that experience is to always carry an extra gear till you stand on starting block and also to believe on your gears and don't get extra tense before the race.

Swimming has been a part of me from the early years of my life. I spent my entire childhood living in Chhattisgarh and over there life revolves around water so naturally, I had to be a competent swimmer. I used to get attracted to pools and water sources since childhood. So, when I was 8-years-old, my father and my father's tutor introduced me to the sport and I I absolutely fell in love with the sport. I used to spend almost 4-5 hours a day at the pool practising, watching seniors, etc.

The whole of swimming, my love towards sport, the spirit it gives to keep practising and to be as diamond sharp not only in sporting career but in every context of life.

There are lots of rivalries in swimming, do you have one?

Hmm…the sportsman spirit teaches us to have a friendly match, but deep down we all know that individually all the sportsperson have a competitor and all of them wants to be on the top. So, yes, by that phase I have many.

Do you have any pre-swim superstitions?

No, not superstition. But I believe in God. Before every race, I take a moment to focus and pray. It's a tradition that I have kept until this day & one that I will always cherish.

Also Read: Kenisha Gupta: ‘Swimming has made me more efficient in everything I do’

Whenever I feel low after a bad race, I sit alone and recall the whole race in my mind. I also watch the video of the race and figure out where I made mistake and what was the thing I left, and sometimes I cry too. I stick that mistake into my mind so that I won't forget it and start working on correcting them. The determination and eagerness to improve on it forces me to re-examine and improve. I'm learning from my mistakes. That's what keeps me going.

Would you like to have swim along with Michael Phelps and what would have been your tactics to beat him?

Yes, for sure, I think that's the question every swimmer would nod yes. Michael Phelps is the greatest swimmer of all time, and the most decorated Olympian in history.

And about the tactics to beat which is well-nigh impossible, but I believe hard work and mind games is the key to success  but that probably won't work on him so the main thing is the smart work.

First of all - Abhinav Bindra sir because he is the first Indian to win an Individual Olympic Gold.

Our Prime Minister – Shri Narendra Modi as he and his team has started such an appreciable sporting extravaganza called Khelo India which has been providing new opportunities for young talents to achieve their goals.

Michael Phelps - You know the reason.

Indian Olympian swimmers who are retired now – they are the gem of the country and my heart desires to meet and talk to them.

My favourite film star – I would love to meet him also.

While racing it doesn't matter whether you’re the best or not but finishing the podium matters. And if it comes to the favourite lane, for me it's the lanes in between because there you can get an idea of everyone's speed in a long event which can be helpful.

Which swimmer’s journey do you find most inspiring?

Virdhawal Khade for the years of sacrifice, dedication and commitment to the Indian swimming.

It's the recent one, winning a silver & bronze at the Khelo India Youth Games 2020.

What is your goal for 2020 and your overall career goal?

For 2020 I had goals related to my sporting career but I regret as all the competitions are cancelled owing to the pandemic however, my overall career goal is to stand on an international podium representing India and bring more laurels to the nation.

Having the identity of a good swimmer in India has been the most proudest one.

I am an I.M'er, so basically, all strokes are fine for me.

Which celebrity would you go swimming with?

Akshay Kumar, and Kartik Aryan are my favourite ones. So, it's them.

Kar Har Maidan Fateh – that's the song I also hear before every race.

JSW Sports in collaboration with DSYS, Govt of Odisha to launch a comprehensive Grassroot Program for swimming

Ameesha Naik is enjoying and embracing each part of tennis